“Season's Greetings”
A Big Girl Now is the third episode of Season 3 of Degrassi Junior High, and the twenty-ninth episode overall. It aired on November 14, 1988.

Lucy is in love—or something—anyway, she's got a boyfriend, and he's in grade 11, and his friend Clutch has a car! Sure, it means she doesn't have quite as much time as she used to for her pal L.D., and Paul does have expectations of her that she's not too sure about, but she can handle it all, she's a big girl now. Snake is having trouble dealing with Wheels since his parents were killed, and Kathleen's so obnoxious about her candidacy for president that Melanie is just going to have to do something.

L.D. asks Spike to come but Spike is busy with her baby so she declines. In the hallway, Lucy ponders about having sex, and when L.D. makes a remark, she says "I'm a big girl now." At Bordon High, Clutch makes a remark to Paul, asking how far he's going with Lucy, he shakes him off, telling him to mind his own business. Degrassi kids are about to go back to their own school, but Lucy decides to ditch with Paul and Clutch, blowing off both the rest of school day and L.D.'s game. The next day, L.D. is ecstatic, she won the game, Lucy congratulates her then tells her she can't sleep over because her mother is ill. Liz has to go, leaving Spike alone at lunch. Lucy goes over to ask Spike what sex was like, and Spike warns Lucy, because of her situation. When they're walking out of the school, Heather, Erica and L.D. are walking with Lucy when Clutch and Paul pull up and call Lucy, so they can go get party supplies. At the party, Paul and Lucy are about to do it, but Lucy stops him, and he walks out. The police are called later on to stop the party by neighbors.

Joey is at his locker when Caitlin walks by, saying hi to both Joey and Wheels. Joey starts to say that Caitlin is into him, but Wheels shakes him off. Wheels expresses that he's still expecting his parents to be there when he gets home, and when Joey proposes a rehearsal, Wheels says he doesn’t want to be in a band anymore. Snake walks by and Wheels greets him, but Snake ignores him. Joey and Snake are brainstorming for someone to replace Wheels when Wheels walks by and Snake jets away. Wheels is at his locker when Snake apologizes for ignoring him, and invites him to go get fries, Wheels declines because he has to go meet his social worker, but thanks Snake anyway.

Kathleen confronts Melanie in class, complaining about the campaign and urging Melanie to help her, when she doesn't, Kathleen calls her over sensitive. Some minutes later, the winners of the campaign are announced, and it turns out Nancy got presidency and Kathleen landed as vice-president. Melanie encourages her, saying she's still second in command and still has a lot of power given her superior intelligence. At lunch, Melanie is suggesting a dance committee to Kathleen, because she wants to get a steady relationship this year, but Kathleen ditches Melanie to sit with Nancy. In the schoolyard the next day, Melanie invites Kathleen to ballet, but once again she blows Melanie off and walks off with Nancy. Kathleen and Nancy are talking at lunch and Kathleen is making suggestions--dress code, dance committee..she says that some grade eights want to be on the committee and they should be denied due to immaturity, Nancy agrees with her. Melanie overheard them and confronts Kathleen, and pours her milk over her, then Melanie apologizes, saying it must have been her immaturity. 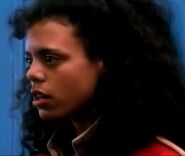