“Take On Me”
Accidents Will Happen (2) is the fifteenth episode of Season 3 of the Canadian television series, Degrassi: The Next Generation. It originally aired on February 9, 2004 on CTV Television and on August 26, 2006 on The N. The episode was written by story editors James Hurst and Nicole Demerse and directed by Eleanore Lindo. It shares its title with the song "Accidents Will Happen" by Elvis Costello.

Manny's pregnant and Craig wants her to keep it and to start a family with her; Emma wants her to give it up for adoption. But Manny's facing a decision about her future that no one else can make for her. Meanwhile, Liberty loves Sean. Sean loves bad girls. You can see where this is going.

Manny discovers that she is pregnant with Craig's child. Ashley, still bitter over Craig cheating on her with Manny, tells the whole school about Manny's pregnancy. When Manny and Craig fail miserably at taking care of Spike and Snake's baby, Jack, Manny realizes she's not ready to be a mother at 14 and gets an abortion, which Craig finds ridiculous.

Sean tells Liberty to get over J.T. She seems to think Sean likes her, but after he set her straight, Sean introduces her to his friend Towerz. 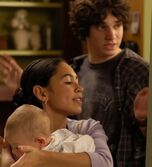 Retrieved from "https://degrassi.fandom.com/wiki/Accidents_Will_Happen_(2)?oldid=2834909"
Community content is available under CC-BY-SA unless otherwise noted.