“LoveGame”
Boom Boom Pow are the first and second episodes of Season 11 of Degrassi. This hour long episode, also known as Spring Fever in the U.S., is the season premiere, which aired on July 18, 2011.

It's finally spring break...but there's never a vacation from the drama at Degrassi. Though everyone is buzzing about spring break's biggest event – Keke Palmer's concert – newly single Sav is too busy wallowing in post-Holly J. self-pity to care. But after a flirtatious encounter with a beautiful stranger, he might get the ultimate consolation prize: a spring fling with a rock star. Though Drew's mom is keeping him on a short leash, he and Bianca are making an honest go of their relationship and growing closer. But when an unwelcome visitor from Bianca's past zeros in on her, Drew tries to protect his girlfriend from a very real and serious threat. How far in over his head is Drew willing to wade for Bianca? Newly out-of-the-closet Fiona is ready to take her new identity for a spin...provided she can untie her tongue and generally not be a spaz in the presence of a potential girlfriend. Now that Fiona knows what she really wants, does she have any idea how to actually get it?

Drew, K.C., Dave and Bianca are at a live radio broadcast to win tickets to Keke Palmer's concert. Bianca freestyle dances on stage to win the tickets for the groups but gets noticed by members of Vince's gang after her performance.  Drew's mom, Audra, had set a curfew for him, prompting Bianca to come over to his house to keep him company. Bianca and Drew lose track of time, and Mrs.Torres catches them. Drew is subsequently grounded for a month and begins to miss Bianca. When he begins to worry that Bianca might be unfaithful while out at a Keke Palmer concert, he sneaks out to keep tabs on her. He discovers Bianca with Anson, her ex-boyfriend who was stalking her at the concert, and throws accusations at her. After Bianca calls Drew out on his jealousy, she storms off into an alley, only to be sexually assaulted by Anson. Drew comes to Bianca's aid and quickly starts receiving a brutal punishment. Bianca takes a brick and strikes Anson in the head, freeing Drew and allowing them both to run away. The next day, she reads in the newspaper that the blow killed him. The pair is contacted by Vince, a gang member, who valued Anson for his usefulness in the drug trade and now seeks retribution from Drew by way of filling Anson's place, with a penalty of death if he refuses. He is given a gun and tasked with killing someone to prove himself worthy of the gang. After a moment of uncertainty, he approaches Officer Turner and confesses to the accident, stressing how it was self-defense for Bianca. As he takes Drew to the station for questioning, Bianca mouths a 'Thank you' to Drew and begins to sob in-front of Degrassi.

Fiona's hopes for a Spring Break romance are dashed when her trip to the Caribbean gets cancelled. Holly J. coaxes her to take an art class with her, where Fiona develops a crush on the class model, Charlie. After class, she speaks with Charlie. She tells Charlie that she is a lesbian and Charlie responds in kind. Fiona lies about being able to ride a scooter and then, when she finds out that she won't be able to get a license as soon as she would like, she lies about why she can't meet up with Charlie, but eventually comes clean about both. When she meets with Charlie again they make plans to sketch at Fiona's place. When they decide to sketch each other, come Fiona's turn she puts on the bikini she was intending for the Caribbean. She and Charlie proceed to make out until Fiona gets scared, making things awkward when they continue sketching. The next day she and Charlie meet outside class and decide to take things slow, meaning, just being friends for the time being.

A heartbroken Sav insists on spending Spring Break moping over his ex until a chance encounter with a sexy celebrity lifts him out of his funk. Specifically, he meets Keke Palmer and either does not recognize her or just doesn't know who she is. He asks her out on a date for the following day and she says that she will be busy working and invites Sav to come to the club where she will be working. Sav brings his sister, who is a huge Keke fan. During the concert, Keke brings Sav on stage with her and dances with him. Later, they chat online and he happens to run into her on the street. She grabs his hand and dashes off with him, seeking an escape from her every day rigamorale. They go to The Dot where they are quickly discovered by her bodyguard. She wishes him well and leaves him with a signed note. 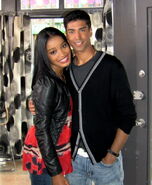 Retrieved from "https://degrassi.fandom.com/wiki/Boom_Boom_Pow?oldid=2859740"
Community content is available under CC-BY-SA unless otherwise noted.