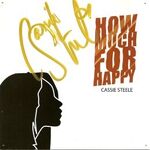 Cassie Steele's mother is of Filipino descent, while her father is British-Canadian. Steele appeared in the 2007 MTV movie, Super Sweet 16: The Movie. Steele is currently living in Los Angeles in order to concentrate on her music career. She is a former member of the band KaraMel. She attended London School of Dance in Scarborough, Ontario and trained in ballet and jazz.

Steele began crafting her own made-up songs to go with her poetry when she was in first grade, then began taking singing lessons. She has been a regular cast member on Degrassi: The Next Generation, playing the character of Manny Santos since the age of eleven. At the age of thirteen, Cassie wrote and recorded the song “Prayer,” which was used nationally to promote HIV/AIDS awareness. She has been on My Babysitter's a Vampire as the girl in the Twilight parody movie.

Steele is close friends with her costars Miriam McDonald, Shenae Grimes, and Nina Dobrev. She also is close friends with Sara Paxton. She is the older sister of Alex Steele, who played Angela Jeremiah, Joey Jeremiah's daughter and Craig Manning's half-sister, and Class of 2016 member, Tori Santamaria.

Steele was starring in The L.A. Complex with Kate Todd, who portrayed Natasha in Degrassi: The Next Generation, and Dayo Ade who portrayed B.L.T. Thomas from Degrassi Junior High / High.