Didn't We Almost Have It All

View source
watch 01:32
She-Hulk Trailer Dropped - The Loop
Do you like this video?
Play Sound

“Didn't We Almost Have It All”

“Man With Two Hearts”
Didn't We Almost Have It All is the fourth episode of Season 8 of Degrassi: The Next Generation. It aired on October 24, 2008 in the United States, and on November 2, 2008 in Canada.

Liberty rushes into the most popular sorority at Smithdale. At Degrassi, Holly J. starts the year with an aggressive "to do" list: rule the school as Student Council President, take the Power Squad to the city finals, get into a top university, and to lose her virginity.

Liberty is all set to join her mother's sorority, but when a new sorority approaches her with more options but higher prospects, she tries to prove to everyone that she can handle the party lifestyle. Manny and Emma tell Liberty that she should still be herself and shouldn't change for the sorority. After drinking too much one night, Liberty and her new friends go streaking through campus. The next day, Liberty wakes up in a hospital due to alcohol poisoning and had to have her stomach pumped out. Manny shows her a picture of her and her friends streaking through campus in the newspaper. Once she gets back to the sorority to find out whether she's kicked out or not, they tell her that she's still in, but she finds out that they only wanted her in the sorority because she was black. She doesn't want to be "the token black girl" anymore, and turns them down.

At Degrassi, there are rumors going around that Anya and Sav had sex. Holly J. thinks she is the only virgin on the Power Squad, so she makes a list of who to have sex with and narrows it down to Blue. She becomes his partner on a project and tries having sex with him in a classroom after school. However he denies her, and she storms out, offended.

Anya shows up to practice the next day and is questioned. She admits that she and Sav are waiting and that she hasn't even met his parents yet. Holly J. considers this.

Blue shows up at Power Squad practice and tells Holly J. that if she doesn't show up after school to finish their project, he'll tell the teacher why Holly J. refused to work with him. She shows up, and he explains to her that he likes her and that if they were to have sex, then he'd want to wait so it would be more special. 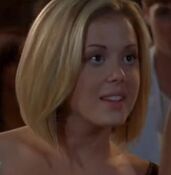