“A Helping Hand...”
Eggbert is the first episode of Season 2 of Degrassi Junior High, and the fourteenth episode overall. It aired on January 4, 1988.

Spike is at her support group for pregnant teens. Their counselor, portrayed by Anne Thornley-Brown, assigns them to take care of an egg (Eggbert the Egg) for two weeks as if it was a real baby. Shane tries to talk to Spike, but she doesn't want to. Shane tells Joey and Wheels that he hasn't told his parents about Spike yet.

Stephanie is at her locker and is throwing out all of her sexy clothes. She gives some of the clothes to Alexa. Everyone in class sees Spike's egg, and begin to call it Eggbert. Mr. Raditch introduces Simon Dexter, the new kid. He sits next to Stephanie who remembers seeing him on TV. In Ms. Avery's class, she introduces Scooter, an elementary student who accelerated to 7th grade.

In the hallway, Shane apologizes to Spike and says he wants to help. She tells him to take care of Eggbert for a week. Shane takes Eggbert to school and everyone makes fun of him. Lucy tells the 8th graders she's having another party. Shane tries to get Spike to take care of Eggbert so he can go to the party, but she says no. Stephanie wants to ask Simon to Lucy's party, but she finds out he's going with Alexa. Everyone is at Lucy's party, but no one's having fun because they can't drink and Lucy doesn't want anything in the house to get broken.

Shane arrives and brings Eggbert. Everyone throws Eggbert around, including Shane. Spike is scared because she's going to have a baby, and she says Shane is only scared that his parents will find out. Spike gets mad and throws down the egg, breaking it. Shane returns home and says "Mom, Dad...there's something I've gotta tell you." 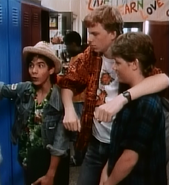 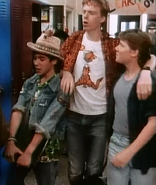