“Nobody's Perfect”
Everybody Wants Something is the fifth episode of Season 1 of Degrassi High, and the forty-seventh episode overall of the original Degrassi series. It aired on November 27, 1989.

At school, Snake, Joey and Wheels talk about the plans for their video; they find Lucy in the hall and Joey reminds her about the video, saying that they've rewritten the script. She tells them that she doesn't want to shoot it and they should get someone else, but Joey says that they'll show her the new script, and if she likes it, maybe she'll want to shoot it; Lucy asks if he means that she gets script approval, and he says yes, so she agrees. The guys all cheer and head off down the hall to work on the script.

Joey sees Caitlin on her way in to school; he tells her that Lucy is going to shoot the video, and asks if she wants to be in it, telling her that she can do anything she wants in it; she tells him that it's great about the video, but says that she doesn't want to be in it. Joey asks her out, but she says no to that as well, and heads in to the school. She sees Claude on the steps and talks to him as Joey watches; he goes back to Wheels and Snake and tells them that Caitlin is being moody and he can't figure her out. They point out that she's been "moody" all term. They go in and find Lucy; she looks over their script and says that it's okay, except for the part where the girls hug and fondle them; Wheels offers to change the script, and Snake asks if she'll shoot it if it's changed; Lucy says she'll think about it. Joey tells them that they should just forget about it and find someone else to shoot the video, but finally agrees to change the script. Lucy and the twins laugh about the control that she has over the video script; Heather offers to help Lucy with the video, since L.D. isn't around. The twins head into the bathroom, and Erica asks Heather why she's interested in helping with the video; Heather says she's interested in Wheels, and since he's going to be in the video, she wants a chance to spend some time with him. When Erica looks in the bathroom mirror, she finds scrawled in red lipstick "Erica Farrell murders babies" and starts to wonder who keeps writing these things as Heather tries to wipe the hateful message off the mirror with paper towel.

In the cafeteria, the guys work on the song and the script, and come up with "everybody wants a car," then realize that they'll need a car for the video too. They go to the quad, where Clutch is, and ask if they can use his car for the video, but he's not interested at all, and says no. Joey wonders what they're going to do, since they promised Lucy the revised script by the end of the day; at the mention of Lucy's name, Clutch becomes interested, and asks what she has to do with it. They tell him that Lucy is going to shoot the video for them; Clutch changes his mind and tells them that they can use his car, but he'll be the one driving it.

At Spike's locker, Liz sees Erica and calls her "the murderer." Spike tells Liz that she's being boring, and that she hasn't been talking about anything but Erica for a while now, and then says that Liz should just give it a rest. Liz wants to know how Spike can say that; Spike points out that she can't say what's right for other people, and wants to know why Liz is going on about it so much; Liz explains that when her mom was pregnant, her dad told her to get an abortion, and her mom wouldn't, so her dad beat her, and she ended up in the hospital in a coma, but never went back to him. Liz points out that if her mother had gone back, Liz would never have been born. Spike hugs Liz, and tells her that she didn't know.

The guys give the script to Lucy to look over; she tells them that she won't do it, but it's only because of the part with Clutch and his car that she's saying no. They want to know why, but she won't tell them, only saying that she won't do it with Clutch there. Heather whispers to Erica that she wants a chance with Wheels, so once they're in the girls' change room, getting ready for gym class, Erica tells Lucy that she might be acting a little unfairly; Heather adds that Lucy should give Clutch a chance, as he might have changed, and they'll be doing the video in public, and they'll all be there if he does anything. Lucy gives in, and agrees to do the video.

In the hallway, Snake, Wheels and Joey are sitting just outside the girls' change room, wondering what to do now; Wheels points out that they're going to have to tell Clutch. Lucy comes out of the change room; she tells them that she'll shoot their video. They check to make sure that she'll do it with both the car and Clutch; she says yes, and the guys all jump up and cheer, saying that they're going to be rich and famous.

Caitlin is at her locker; Claude comes up, and gives her a box, telling her that it's a present. She opens it; it's an earring, the mate to the one that he wears. He tells her that it's never been worn before, and holds it up to her ear, then moves closer to kiss her. Caitlin pulls back and says no; Claude asks why not, and when she says that there are people watching, he tells her that they're not in junior high any more. They kiss; Maya, coming down the hallway sees them, and after Claude leaves, tells Caitlin that Joey is going to be really hurt when she dumps him.

Erica goes to her locker; Liz is there taping a flyer to the locker door that has a picture of a fetus on it and says, "Stop killing the unborn." Erica realizes that it's been Liz doing this all along, and asks how she could be so horrible. Liz informs Erica that she's the one who is horrible, because Erica killed a baby; Erica retorts that Liz doesn't know what it was like or what she went through; the two start name-calling and then start fighting, falling to the ground and pulling each other's hair. Students stand around and watch; Mr. Walfish comes running down the hall and pulls Erica off Liz; Spike helps Liz up and takes her away, with Liz shouting back at Erica that she should be ashamed of herself. One student picks up the flyer that Liz was taping onto Erica's locker and they all look at it.

Caitlin finds Joey in the hall, and pulls him into an empty classroom to talk; she tells him that they haven't been getting along very well recently; Joey admits that he knows this, and says that it's his fault because he's been wrapped up in making the video, but it will be finished soon, and they'll be able to spend more time together. Caitlin says that it's not his fault, that they've just grown in different directions, and while she still likes him, but not the same way as before. She tells him that they should stop seeing each other; Joey asks if it has anything to do with Claude, and if she's going to go out with him. Caitlin doesn't answer that question, only saying that she's sorry. Joey walks out of the classroom looking confused; he goes outside and leans up against the wall of the school, looking like he's about to cry.

Outside, Clutch is waiting by his car; Wheels and Snake arrive with Lucy and Heather and start setting up for the video; Heather tells Lucy that Erica might come and help too. Lucy says that she doesn't understand Liz at all; adding that it's one thing to be pro-life, but something entirely different to write "murderer" on the wall. As they set up, Lucy seems to be uncomfortable around Clutch; they all stand around waiting, and Lucy finally asks, "Is this it? We just stand around and watch you guys look stupid?" Wheels and Snake tell her that they have to wait for Joey, and even though he's late, they're sure that he'll show up. Lucy suggests that he might have stage fright, but Snake doesn't buy that, and says that Joey will show up. Joey comes out of the school with his keyboard, takes a deep breath, and heads over to Clutch's car, pretending to be happy. Snake points out that he's late, but Joey just says that concerts never start on time. They start filming, doing shots on top of Clutch's car, then in the dumpster, then under a tree. While filming, Lucy is talking to Clutch, and seems to be getting along with him. After the video is finished, Wheels tells Joey that if the video doesn't impress Caitlin, nothing will. The guys pack up their instruments into the trunk of Clutch's car; they want to celebrate and Snake points out that they still have 30 dollars left in the budget; Joey hands over the money and tells them to go out, but says that he's going home as he's tired. Wheels suggests that Joey's just hungry and should come out with them, but Joey says no, he's going home. The gang goes off for burgers, and Joey watches them leave. 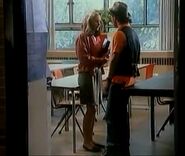