“Eye of the Beholder”

“Parents' Day”
Eye of the Beholder is the fourth episode of the Canadian television series, Degrassi: The Next Generation.

Insecure Terri does not want to attend Degrassi's first nighttime dance because she's self-conscious about her weight and is sure that "no guy would ever be interested in her". Spinner has a crush on her, but Terri is utterly oblivious when he displays interest in her. It also turns out that a jealous Paige wants Spinner for herself and will do anything by playing on Terri's insecurities. She gets Terri drunk thus making her embarrass herself at the dance. In the end, Paige splits the couple up before they have even begun. 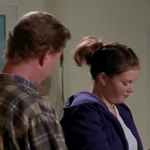 Terri's positive that no guy will ever be interested in her and she wants to skip the school dance. Terri's father encourages her to go, but she claims no guy wants to dance with a fat cow like her. Later at school, when Ashley and Spinner ask if she's going to the dance, she tells them that her father is overprotective and won't let her go. They don't seem convinced, until Spinner expresses interest in her. Ashley begs Terri to let her give her a makeover for the dance. Terri finally agrees, and actually seems excited at the prospect. However, a jealous Paige wants to help too, though her motives are less than altruistic. Paige secretly wants Spinner for herself and plays on Terri's insecurities, ultimately getting Terri drunk and into some sexy but unflattering clothing. Unfortunately, Ashley went ahead to the dance to do her presidential ticket collecting duties and isn't there to stop Paige from ruining Terri's night.

Meanwhile, Emma is forced to go to the dance alone, since Manny won't go due to her overprotective parents strict rules. However, at the dance, although lonely at first, she soon meets Sean, who is in a bad mood, due to having to repeat grade 7 again. Although he was grumpy at first, after spending some time with Emma, the two soon form a small bond and become friends.

Back at the dance, Paige arrives with Terri, who is visibly drunk. Ashley protects Terri from being seen by Principal Raditch, but she is unable to shield her from Spinner's questioning gaze. She does at least fix Terri's clothes so

they aren't so revealing. Terri and Spinner share a dance, but Terri's drunken state ruins the entire event and she ends up vomiting in the bathroom. Paige seizes the opportunity to slip into Spinner's arms, effectively stealing him right out from under Terri's nose.

Meanwhile, Terri and Spinner exchange an awkward greeting, while Paige stands nearby. She then walks up and makes her claim on Spinner, knowing that Terri had embarrassed herself at the dance. Ashley offers a comforting presence but it was clear that Terri was crushed. Finally getting her way, Paige happily walks away with Spinner, leaving Terri heartbroken.

Retrieved from "https://degrassi.fandom.com/wiki/Eye_of_the_Beholder?oldid=2803248"
Community content is available under CC-BY-SA unless otherwise noted.