“Dinner & a Show”
Great Expectations is the third episode of Season 2 of Degrassi Junior High, and the sixteenth episode overall. It aired on January 18, 1988.

Liz O'Rourke starts her first day at Degrassi Junior High School. She already doesn't like it because she thinks everyone is too preppy. Joey instantly likes her and asks her out.

Joey says he has heard rumors about Liz and wonders if she "does it". Joey asks Liz to be his partner on a class project and she agrees. Arthur tells Yick that he has been having wet dreams and he doesn't know what to do.

Spike talks to Liz and they become friends. Arthur overhears Melanie talking about a sex radio show for teens and Yick thinks Arthur should call. Liz and Joey are working on their project in the library. They decide to finish it at Liz's house. Liz tells Spike that she likes Joey.

Joey thinks he and Liz are going to do it, and goes to buy condoms. Joey arrives at Liz's house and they begin working. Joey asks Liz if she wants to have sex. Liz gets mad and kicks Joey out. Arthur gives in and calls the show. Dr. Sally tells him that it is okay for him to have wet dreams.

Joey is sad because Liz is still mad at him. He tells Wheels that he feels really bad because he genuinely liked her. 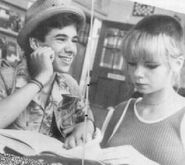