Hastygram is a fictional social networking site first seen being used by Adam Torres that is used by numerous students/alumni from Degrassi Community School.

In About a Girl, Adam scrolls through Becky's Hastygram profile when he suspects that she and Todd are seeing each other, especially after viewing all of their pictures together.

In Unbelievable, Frankie is showing Zoë what happened to her that night at Miles's party. Also Becky was showing pics of Zoë from the party to Imogen on her Hastygram so she can do her story.

In (You Drive Me) Crazy, Maya logs into Hastygram to see that Miles has blocked her. She throws her laptop across the room and has an anxiety attack due to her fears following her dreams about Miles.

In #BootyCall, Lola cites Tiny's Hastygram likes as why he likes girls with big butts. She posts Shay's edited picture on her Hastygram and becomes upset when she finds out Tiny didn't see it because he doesn't follow her.

In #NoFilter, Lola and Shay catfish Frankie on Hastygram.

In #ThisCouldBeUsButYouPlayin, Jonah posts a picture of him and Maya to Hastygram. This leads Zig to get a notification from the app and to cause him to become jealous of Jonah.

In #SquadGoals, Maya checks up on Zig by scrolling through his Hastygram and accidentally likes one of his pictures.

In #ThatAwkwardMomentWhen, Zoë posts a video of Winston falling into the road and almost being hit by a scooter. She gains multiple likes and reposts, even a repost from Shane Dawson. She self-harms by burning herself on the wrist with the flame of a candle and then posts a picture of the burn on Hastygram with the caption "#lovehurts." Later on, she scrolls through self-harm tags on Hastygram.

In #OMFG, Zoë is scrolling through Hastygram tags that relate to self-harm and comments on a post saying that everyone hates her. Other people reply, saying that they don't and that they think she is funny. She posts a picture of cuts on her thigh with the caption "these are the only smileys in my life." 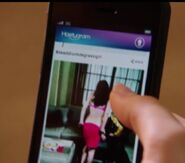