“Loves Me, Loves Me Not”

“The Whole Truth”
He Ain't Heavy... is the sixth episode of Season 3 of Degrassi Junior High, and the thirty-second episode overall. It aired on December 5, 1988.

When Snake's beloved big brother Glen comes home unexpectedly from med school, Snake is thrilled. But Glen has come home to tell the family that he's gay, and Snake isn't sure he can handle it, especially as an AIDS discussion in class adds fear to the emotions he feels. Joey continues his quest for fame and fortune in the music business, and lands a job at CRA-Z radio—emptying wastebaskets.

Snake, Shane and B.L.T are seen signing up for basketball tryouts, and Snake says that he wish he could be good as his brother, who was captain of the team. In class the ninth graders have a discussion on AIDS and after class Shane, B.L.T and Snake are talking using high-pitched stereotypical gay voices before walking off. Snake and the guys are shooting hoops after school when Glen, Snake's brother pulls up, and offers to drive Snake home, so he does. Before going in the house, Glen drops the bomb on Snake, telling him classes weren't cancelled, and that Glen actually came down to tell his brother and parents that he's gay. The next day, B.L.T is joking around again, when Snake gets angry and pushes him against the wall, B.L.T retaliates and does the same to him, but Mr. Garcia breaks it up. After school, Snake is shooting hoops by himself before walking off. When Snake is just about home, Glen storms out of the house with his bags and starts to drive off, and he tells Snake that their parents say he's not their son anymore, and he's not coming back until he's welcomed.

After school, Joey is seen trying to convince Spike to buy a Zit Remedy demo, and several others, who say they don't have money and walk off. Caitlin walks out and ignores Joey, even when he tries to call her beautiful again. At the radio station, the receptionist asks Joey if he's there for the job, and when she finds out he's here to drop off a demo tape, she offers to get it to the program manager, but Joey says he'll wait. After awhile, the receptionist says Joey has to leave, because she is, so he says he'll come back the next day. When Joey comes in the next day, the receptionist is on the phone, talking about a part time janitor job for a kid, he offers to take the job before sitting down, and she says she'll make the call.

Arthur is at his locker with Yick when Dorothy is seen shaking hands with a friend. Her friends go over to Arthur and ask him if he's rich, he says no, and Arthur thinks that Yick is telling people he's rich. They walk back to Dorothy is disbelief, saying they knew she was lying. Arthur is walking up the schoolyard with Yick when Bartholomew asks him if he's really rich, and Arthur looks disapprovingly at Yick before denying. When Yick and Arthur depart after school, Dorothy approaches Arthur and tells him she lost all her savings, because he was lying about being rich, he says he'll pay her back, but she was crossing her fingers. 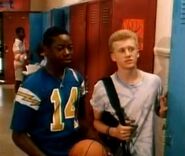