“Stressed Out”
It Creeps!! is the fourteenth episode of Season 1 of Degrassi High, and the fifty-seventh episode overall of the original Degrassi series. It aired on February 6, 1990.

Lucy becomes director and writer of her first film: a feminist horror flick starring the Zits, Simon and Caitlin, with Alexa, Tim and Heather as her crew. But the film that's playing in Lucy's mind is a far cry from the one that's unfolding in the empty Saturday morning corridors of the school. Spike is nervous when Shane starts hanging around the school watching her.

Lucy is still striving to enter the film industry. Walfish assigned the class to write a script, and Lucy wrote her script about a feminist horror by the name of It Creeps!, she's imagining it and we see Simon taking a shower when the perpetrator of the film--later revealed to be Caitlin--stabs him to death in the shower. Mr. Walfish hands back the scripts, giving Lucy an A+, Walfish then assigns them to write a theatrical writing assignment, a screenplay. Lucy approaches him and asks if her and some friends could make her 'It Creeps' into a film for the next assignment instead, he says she can, and agrees to be their student adviser for when they film it over the weekend.

Shane is seen at the school, talking to Luke, when Spike sees him, her and Liz quickly walk away. Shane gets angry with Luke and says he should get kicked in the face, and mentions that he wants to see "her", assuming he is referring to Spike. The next morning, Shane is inside the school with Luke again, waiting for Spike, when she enters he greets her and tries to talk to her. However Spike isn't comfortable to talk to Shane, she walks away with Liz, and he yells at them, saying they should be kicked in the head for walking away.

Lucy has scripts and everything ready for the shooting of her film, but what she needs is the actors. She convinces Caitlin to be the lead and only female role, and Simon, Joey, Wheels and Snake to play as the four victimized males. Simon plays his part fine, however as an experienced actor, he is having trouble because he doesn't know why his character is showering in the school, but Alexa --the script assistant--convinces him to just roll with it. Lucy is getting annoyed however with Joey, Snake and Wheels, because they aren't taking the film even relatively seriously, and constantly make jokes about how unreal and ridiculous it is. This highly annoys Lucy because she's putting a lot of work into the assignment, and she wants it to be looked at as a serious horror film.

Shane is in the school again, and Spike finally goes into a real conversation with him, despite Liz's reluctance. Shane tells her how he's going to a special school for people like him now, and he asks her out to a movie, which she declines to. Shane starts to get angry, and he calls her a jerk, but she calms him down in time, and reassures him that she still wants to be friends, and that she's sorry about what happened, and offers him to coffee some time.

Lucy presents her film to the class, thanks who helps before showing it, and is excited for what the class thinks. Throughout the whole film they are constantly laughing in every scene, She gets fed up and leaves, Mr. Walfish follows her out and reassures she did an excellent job, and just has to strive the next time to do better. By the end, the class enjoyed it and clapped for Lucy, ultimately cheering her up. 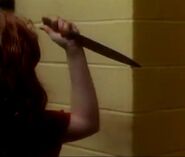