Loves Me, Loves Me Not

“Loves Me, Loves Me Not”

“He Ain't Heavy...”
Loves Me, Loves Me Not is the fifth episode of Season 3 of Degrassi Junior High, and the thirty-first episode overall. It aired on November 28, 1988.

Caitlin knows he's not her type, but she can't help being attracted to Joey. And Joey figures he can use all the help he can get to get through grade 8 this time. So when the two are paired up to review a movie together for English class, they both figure it's a perfect match-up. Alexa tries to give Michelle some help getting to know B.L.T.--with unexpected results. And Dorothy, Arthur's really irritating cousin, has developed a crush on Yick.

Joey and Snake are selling demos of the Zit Remedy for two dollars a piece in the hallway, Caitlin goes up to greet Joey and buy a demo. Raditch announced that they will be breaking up into groups after lunch, and disperses the class, and classmates point out that Caitlin was staring at Joey the whole class, making her crush crystal clear. At lunch Joey talks about his crummy marks. Snake and Wheels recommend he get help from another kid, like Caitlin, the smartest in the class. Joey goes to Caitlin and asks if she'd be his partner for the movie project, and they plan to see a movie later that day. Joey then asks for a second chance, and to take her to the dance, she agrees. Caitlin feels like it's a date, but her friends tell her he's not her type. After the movie, Caitlin says she didn't like the movie due to sexism, but Joey thought the opposite, then Joey walks her home and they decide to work on the project the next day at lunch. At lunch Joey is about to walk off, saying Raditch likes her opinions more, and she'd be better off doing it herself, but Caitlin convinces him to give both opinions. Caitlin and Joey present their preview in class, getting an A, Joey calls her beautiful and perfect before walking off. Joey enters the dance and sees Caitlin, but only asks her if she's seen Liz, she tells him that Liz's in the gym. Caitlin reminds Joey of their dance but then goes off to Liz, and Caitlin overheard Joey calling Liz beautiful, and she left the dance. Caitlin goes home, starts to remove her make up and she throws out the Zit Remedy demo. The next day, Joey tries to get more help from Caitlin regarding schoolwork, but the blows him off.

Yick is at lunch with Arthur when he realizes that Dorothy is staring at him. Yick asks Arthur what's wrong with her, but all he has to say is that she's weird. Yick points out again how much Arthur looks like his cousin, and they walk off. After school Yick and Arthur go their separate ways and Dorothy is behind a tree, waiting for Arthur. Dorothy asks if Yick likes her, but Arthur tells her no way and to beat it. Yick is walking to school when Dorothy jumps out and squirts him with a water gun, he calls her a narbo as she runs off giggling. Yick and Arthur are seen walking up the school yard again when Dorothy jumps up from behind a tree and squirts Yick again with a water gun, and runs off. He asks Arthur what's her problem, and Arthur spills that Dorothy likes him.

Alexa and Michelle are at lunch discussing the dance, how Alexa will be dancing with every cute boy, and that she doesn't care about Simon, they might be splitting soon. Once they sit down, Alexa catches Michelle looking at B.L.T., realizing she likes him. Alexa asks Michelle if she's gonna go for it, but she says no because she's too shy. Alexa says she'll coach Michelle, because she knows all about boys. After class, Alexa offers B.L.T. to come to the park to eat lunch with Michelle, Simon and herself, he accepts. At the park, the four start to discuss Teen Academy IV, Michelle didn't like it, but Alexa and B.L.T. did. On the way back Alexa and B.L.T. just keep talking about the movie, confirming it to Michelle it was a bad idea. After class Michelle asks Alexa if she's waiting for B.L.T. and thanks her for the help. Alexa tells Michelle that she doesn't think Michelle is suited for him because she can at least talk to him, then reassures Michelle that boys are like buses--if you miss one another comes around in a few. Michelle and Simon walk by Alexa at the dance, and Michelle greets her and asks if she's waiting for a bus. 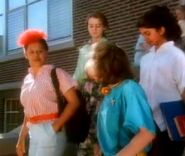 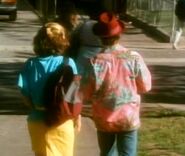 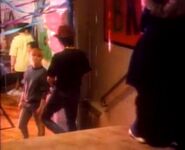 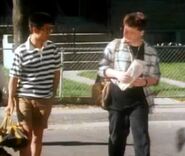