“A Tangled Web”
Loyalties is the third episode of Season 2 of Degrassi High, and the sixtieth episode of the original Degrassi series. It aired on November 19, 1990.

Michelle, B.L.T., Simon and Alexa were always the fabulous four, but now that Michelle and B.L.T. have broken up and B.L.T. has a new girlfriend, Cindy, Alexa's loyalties are divided. Snake develops a crush on Michelle, but she's just not ready for it. Caitlin is planning a fancy dinner for her parents' 20th wedding anniversary, but discovers her father is seeing another woman.

Snake and Michelle are working on a project together in the resource center when Snake starts to show interest in Michelle. Later on they present the project and are seen walking out of the class talking to each other. They then go their separate ways and Snake begins to talk with Wheels, he tells Wheels that he likes Michelle but isn't going to ask her out because he's afraid he'll mess it up.

Caitlin is with Kathleen, Melanie, and Diane explaining how her parents anniversary is approaching and she wants to plan a special dinner for them. Maya approaches the group as Melanie gives Caitlin an idea on a restaurant she can plan the dinner, and Maya says that her and Caitlin will check it out on the way home.

Michelle is looking through the glass at the field where B.L.T. is when Alexa approaches her. Alexa tells Michelle that she's sorry about their breakup, but Michelle brushes it off and says that her and B.L.T. breaking up is the best thing that could have happened. They start to talk about B.L.T.'s new girlfriend, Cindy, Michelle says she doesn't look too bright, but Alexa says that she's okay. Michelle is puzzled and asks Alexa if she's been hanging out with her, and Alexa tells her that it's hard not to because Simon and B.L.T. are best friends. Michelle asks if they can hang out later, and Alexa tells her that she's going to a movie with Simon, but she can come along too. Alexa leaves, then Michelle goes back to watching B.L.T. and Cindy.

Alexa tells Simon that she's letting Michelle tag along to the movies with them after his football game, but he isn't thrilled and thinks that Michelle has been hanging out with them too much and is a downer. Alexa defends her, saying that she'd be a downer too if he cheated on her. B.L.T. and Cindy then approach them and tell them that Cindy's uncle got them four tickets to a concert later that night and they're excited, until Alexa realizes that she'll have to bail on Michelle.

Joey is trying to start up his car while Wheels is encouraging Snake to ask out Michelle because he likes her, and Wheels thinks that she likes him too. Snake wants to be casual when asking her out, so Joey advises him to just drive up by her when she's walking to school and casually ask her out.

Caitlin and Maya are going o the restaurant Melanie suggested to make a reservation for Caitlin's parents anniversary, but when they enter, Caitlin spots her father at a table with another woman. They move to the side so Caitlin's father won't spot them, and they see him hold hands with the woman and then share a kiss.

Alexa calls Michelle before going to the concert with Simon, B.L.T., and Cindy, and she tells her that she can't go to the movie with her because she has to go to a dinner, but they can hang out tomorrow.

At home Caitlin is helping her mother with dinner when her father comes home from the restaurant.

Michelle approaches Simon and Alexa in the hall about going to the movie later that night, but Simon makes a comment about how he's exhausted after the concert last night, which angers Michelle because Alexa lied to her and just said she was going to a dinner. Simon apologizes, saying that they wanted to go to the movie, but Cindy's uncle got them last minute tickets, which just angers Michelle more because she realizes that B.L.T. must have been there as well. Alexa tells Michelle that she has a life too, to which Michelle remarks that she doesn't do anything without Simon. Alexa tells her that she's not going to the movies with her again, but Michelle replies that she doesn't care because she doesn't need traitors for boyfriends or best friends.

Michelle is still angry with Alexa when she goes to class and is approaches by Snake. He asks her out later that night, she still looks angered, but accepts his offer.

It's the day of her parents anniversary when Caitlin goes home to find her mother is home early and starting up dinner, but says it won't be for awhile because Caitlin's father called and said that he's working late. Caitlin is upset but her mother apologizes for the ways things have been lately, and says it's her fault for being so busy at work lately. Then Caitlin's father comes home with flowers and champagne, and says that he's taking the three of them out to dinner, and Caitlin suggests the restaurant that she spotted him and the other woman at the other day, but he seems unsure. Caitlin tells them that they should just go out to dinner alone because it's their anniversary, and she has work to do.

Snake and Michelle are at the movie theater in line when Snake realizes that Michelle is quiet, and makes a comment about it. She tells him that she's fine, but she shouldn't be there, even though she doesn't seem fine. Snake suggests that it's about B.L.T., because they did go out for awhile, but she says that they only went out for awhile because it took her that long to realize he was a jerk, and she also found out her best friend was a jerk that day. She continues to insist that she's fine, but she runs off crying. The next day, Michelle apologizes to Snake about the date last night, and says that she did some thinking, and she isn't going to be ready to date for awhile, but when she is, they can try again. 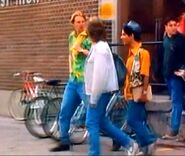