Marc Minardi
Lucas Valieri was a former student at Lakehurst Secondary School and Degrassi Community School, where he was commonly known as a delinquent, bully, and failure. He became the father of Isabella Jones at age 14 after getting Mia Jones pregnant, and became a somewhat deadbeat dad after harming his relationship with Mia. He still lived with his mother after dropping out in his senior year. An unstable home life and a delinquent group of friends have led Lucas down many a dark path, though beneath his rough exterior, he means well. Short on attention-span and book smarts, most of Lucas’ recreational pursuits find him at odds with either school authorities or the law. He became so embarrassing that his own sister, Jane Vaughn, changed her name from "Anastasia Valieri" so nobody would know they were related. Although, the siblings have grown to care a lot for each other, Lucas even threatened and kicked out their father after Jane confessed that he molested her as a child. Never afraid to speak his mind, Lucas’ sharp tongue gets him in as much trouble as his quick fists. However, he has a good heart, so if he can get away from his bad influences, he might actually make something of himself one day. Maybe.

Lucas was close friends with Johnny DiMarco and Bruce the Moose due to being involved in Johnny's Gang. He is the son of Evelyn Valieri and Carlos Valieri, the older brother of Jane Vaughn, the father of Isabella Jones, and friends with Bella's mother, Mia Jones. He was also assumed to be friends with Drake Lempkey due to dialogue, and enemies with Nic. Lucas was originally enemies with Spinner Mason, but the two became friends the following year during Degrassi's Alumni Football Game. Many others had a dislike or conflict with him and his friends, like Emma Nelson, Darcy Edwards, Manny Santos, Liberty Van Zandt, Toby Isaacs, Danny Van Zandt, Derek Haig, and Jimmy Brooks. He was portrayed by Marc Minardi.

In Sweet Child O' Mine, Lucas wants to be back in Mia's life. He starts to win her back by giving Mia money and babysitting Isabella. However, Mia feels he shouldn't be allowed back in their life just yet. She volunteers for the Spirit Squad dance and dances with a cute boy, but Lucas interrupts her while she's dancing and spills about Isabella. The boy freaks out and leaves her, making Mia frustrated. Mia decides that since Lucas is her only choice, she will give him another chance.

In Another Brick In The Wall, Lucas is seen with Johnny, teasing Snake. Later on, he is seen with Mia as she was about to sign the card for Mr. Simpson. But before she did, Lucas stopped her saying that they don't want a pedophile in the school. When Snake comes back to Degrassi, Lucas shows him the Mr. Simpson Perv Teacher website, which makes Snake angry.

In Everything She Wants, Mia is convinced by Lucas that she needs to take a break from motherhood when he invites her to his party. Mia comes with Isabella, which makes Lucas mad because he thought that it was just going to be just him and Mia hanging out. She puts Isabella in a room upstairs to sleep in so that she can party downstairs. Mia has some drinks, but she is confronted by Jane when checking on Isabella. Jane tells her that she needs to leave the party and take care of her child. Mia decides she is right, but as soon as she is about to leave, the police show up, saying there was a noise complaint. They stop Mia from leaving, as she had been drinking. The police question Lucas if Isabella is his child, and he answers no, saying she is Mia's. The police file a report with Children's Aid, and Mia tells them that she is raising Isabella alone with her mother.

In Jane Says (1), Jane and Lucas' father comes back to town. The whole family, much to Jane's chagrin, is excited that he is back in their lives. Jane is suspicious about her father, but she can't quite understand why. When she finally remembers what he did to her as a little girl, she feels uncomfortable.

In Jane Says (2), After finally remembering the sexual abuse her father inflicted on her as a child, Jane is now fully aware why she has hated him for so long. She remembers him saying that she had "backward pajamas" and that he had to "fix" them for her. She also remembers him forcing her to promise to not tell anyone. She freaks out when she sees him near Isabella and pushes him away. Lucas, now fully understanding Jane's resentment of their father, and his fear for Isabella he tells their dad that he needs to leave. Mr. Valieri leaves and the whole family goes into counseling to try and get through it. This is Lucas's final appearance on Degrassi. 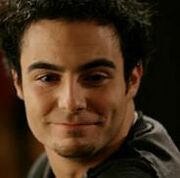