“Family Politics”
Mother and Child Reunion (2) is the second part to the two-part series premiere of the Canadian television series Degrassi: The Next Generation.

While her mother attends the reunion, Emma visits Jordan at his hotel where she meets his teacher, Mr. Nystrom (Jeff Gruich). He takes her up to Jordan's hotel room but as they enter, Emma sees that it is completely empty except for a video camera which has been set up. She immediately becomes suspicious and tries to escape but Nystrom blocks her access to the bedroom door. She locks herself in the bathroom and comes to the startling realization that Nystrom is Jordan. Mr. Nystrom apologizes and tells her he will let her go, but when she comes out of the bathroom, he grabs and restrains her.

Unable to get in contact with Emma, Manny tells Toby and J.T. that she is afraid that Emma may have gone to meet Jordan. They hack into Emma's e-mail account and realize that Jordan has told her a number of lies. They discover which hotel Emma is meeting Jordan at and rush to the school to inform Spike. As Nystrom attempts to rape Emma, Spike and Snake arrive just in time to save her. Emma manages to break free from Nystrom and rushes out of the hotel room. Snake restrains Nystrom until the police arrive to take him away.

Meanwhile at the reunion party, Joey and Caitlin meet Allison Hunter (Sara Holmes), another Degrassi High attendee. As the evening progresses, Joey overhears Keith and Allison flirting with each other, and Keith reveals he does not want to marry Caitlin. When Joey confronts Keith, their argument turns into a physical altercation, and Allison has to tell Caitlin about Keith's hesitance over getting married. In the end, Joey and Caitlin have a heart-felt discussion about their past and their relationships, and after ten years, finally make amends.

The next day, people and former students from all over are showing up for Degrassi's 10 year reunion. Snake gives Caitlin, Joey, and Lucy a tour of the new and improved Degrassi, while Keith goes to get them drinks out of boredom. After a talk, Joey and Caitlin decide to be friends again putting the past in the past and the present in the past. However, back at the reunion party, Joey overhears Keith, flirting with one of Joey's old friends (Allison Hunter), having doubts over his planned marriage. Allison's flirtation peaks when she tells Keith that he's an artist and should be open to new experiences and that she would love to come visit him, which he responds by giving her an invitation for him to "go out with her, and show her around".

Meanwhile, over the phone, Emma lies to Manny, saying that she decided not to meet Jordan, and will be busy watching a television show about the "Wildlife Refuge", and thus cannot meet with Manny for their movie night. During the evening, Emma took a taxi to the hotel where she planned to meet Jordan. She enters and waits for him in the main foyer. At Toby's house, Manny arrives and informs Toby and J.T. of her suspicions of Emma. Citing that Emma wasn't at home, unresponsive to cell phone calls, and the show she was supposed to watch wasn't even on, Manny, Toby, and J.T. speculate that Emma is indeed meeting Jordan, contrary to what she told them. Toby now tries to hack into her e-mail by abusing the password recovery program.

Back at the hotel, Emma is spotted by a male adult who claims he's Jordan's teacher on the school trip. He invites Emma to go to his room to meet Jordan and the rest of his classmates to which Emma agrees to (after she heard that Jordan brought his petition all the way from Yellowknife for her to sign).

The man brings Emma into his hotel room and offers her pizza. He then shows her his video camera saying that he and his class were going to be making a video journal of the school trip. He hands Emma her pizza and she takes it.

Some time passes, and the two start talking, but Emma notices that the room is still very quiet. After finally realizing that there were no other kids around in the room as well as the fact that he knows so much about there online conversations, a frightened Emma attempts to leave but finds that the door is locked. Unable to leave the hotel room, she locks herself in the bathroom, realizing that the man was really Jordan all along. Emma listens through the door in fear as "Jordan" starts talking to try and calm her down. In his attempts to comfort her, he says that he will be going down to the lobby in a moment and it will be her choice if she wants to leave or not. Emma remains quiet in fear, not knowing what to do. She waits in the bathroom for a few minutes longer.

However, after some time, she then exits the washroom and tries to leave, but the door is closed by "Jordan", who was still in the room. "Jordan" then tells Emma that if she screams, he will tape her mouth shut. He then takes her onto his bed and sets up a video camera to film him raping her. "Jordan" starts whispering in her ear and moving over to her while she is shaking. He then tells her that he will be with her for hours.

During Caitlin's speech at the reunion, Joey confronts Keith about his intentions on marrying Caitlin. The two start fighting when Joey mentions what a jerk Keith was being and how he wasn't committing himself to Caitlin. After their major argument, they get into a fight until held off by Snake, Spike, Wheels and their classmates. Caitlin then realizes Keith didn't want to marry her and promptly leaves in tears.

Outside, Caitlin breaks down crying saying that Keith wasn't the one while confiding in Joey. She calls herself a fraud and references herself giving Emma relationship advice the other night. Joey finally opens up to Caitlin and talks about his relationship with Julia. The two then find comfort in each other and have a long heart-to-heart discussion, finally reconciling after ten years.

Toby eventually manages to access Emma's blog page and with the help of J.T. and Manny, he is able to answer her secret password questions correctly and gain access to her e-mail's. Manny and J.T. are relieved and Toby proudly says that if he could do it, so could Jordan.

After the three review Emma's emails, they discover that "Jordan" was a cyberstalker and had been reading the e-mails to make Emma feel like they shared common interests. Once finding out which hotel and room Emma planned to meet "Jordan" in, the trio of friends run to Degrassi Community School to inform her mother of their discovery.

Upon arriving at Degrassi, they warn Spike and Snake about Emma. Spike starts panicking, quickly calls the police, leaves the reunion early and starts driving off to the hotel with Snake, while Manny, Toby and J.T. stay behind after doing everything they could do to help Emma.

At the hotel, "Jordan" begins touching Emma's legs, brushing up against her and kissing her neck, while she sits on the bed, cringing and shaking. However, before he could rape her, Spike and Snake make it in time to rescue Emma. They bang on the door and plead for her to open it. She escapes Jordan's grip by biting him and runs to the door. She quickly bolts outside and stands next to her mother, while Snake threatens the Internet predator, saying that if he made another move, that he would break his neck. The police promptly arrive to arrest "Jordan", who is revealed to be a repeat offender.

Back at the Nelson's house, the police take Emma's computer as evidence and urge Spike to keep it in the living room when it's returned, in order to "keep the cyber stalkers out of her room". Spike goes upstairs to Emma's room and confronts her. They argue over her decisions, and she explains that it's impossible to talk with her mom as she "doesn't remember what it's like to be 12". When Spike convinces Emma that they can talk anytime, leaving Emma to break down crying in her mothers arms. 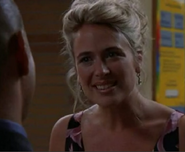 Retrieved from "https://degrassi.fandom.com/wiki/Mother_and_Child_Reunion_(2)?oldid=2899972"
Community content is available under CC-BY-SA unless otherwise noted.