“All in a Good Cause”

“Testing One, Two, Three...”
Natural Attraction is the twelfth episode of Season 1 of Degrassi High, and the fifty-fourth episode overall of the original Degrassi series. It aired on January 23, 1990.

When Erica starts seeing a new boy, it frightens Heather. One abortion was bad enough, but what if she goes too far again? Heather has to come to terms with her own guilt at having supported Erica and what she did. Alison says she's giving up on her campaign to win Snake, but when he invites Alison's best friend Amy to the dance, the claws come out. Scooter suddenly notices that his pal Tessa is a girl!

Heather is having nightmares about Erica's abortion, because as it turns out, Erica has a new boyfriend, and they are moving quite fast. Heather seems very upset seeing them in the hallway talking, and when she finds out they're going out to a movie, and to the dance. Erica is elated, and says that he reminds her of someone..and that someone is Jason, who got her pregnant, giving Heather more concern.

Tessa develops a crush on Scooter and wants to go to the dance with him..but she's too shy to ask him, and she thinks that it should be the guy asking out the girl. Dorothy urges Tessa to approach Scooter and ask him, but all she asks is if he's going to the dance..which he declines because he's going to watch a documentary with Bart..

Alexa and Lucy are both really happy for Erica's new relationship, Heather on the other hand is still worrying about them taking it too far. Erica wakes up to see Heather talking and moaning in her sleep..of another nightmare about Erica's abortion..but Erica mollifies her, and they go back to sleep. Erica and her boyfriend go out to the movies, and she promises to be back by 10:30, which she isn't, and it turns out they drove around a bit after the movie and kissed, he also asked her to the dance.

Amy and Allison are in the middle of a dilemma--neither of them have dates for the prom, both determined to find someone before it's too late, because they aren't going alone. Allison asks an upperclassman by the name of Nick. Amy asks Allison about Snake, who says she's over him..then Snake asks Amy to the dance, who says yes. When Allison finds out, she is appalled, because she was lying and really still liked Snake.

Dorothy urges Tessa to ask out Scooter again, so they approach Scooter and Bart. Tessa tries several times to blurt it out, but Dorothy said it for her, which Scooter accepted. Although, Scooter is concerned about the slow dances at the dance..because he doesn't know how to slow dance, but Bart tries to teach him.

Amy and Allison are still on some rough terms when the dance comes around the corner later on. Everyone is complimenting Amy's sweater, which agitates Allison, because it's really her sweater. In the bathroom, she tells Amy to give her the sweater back, which she does, but she then demands Allison to give her back her scarf, shoes, which she's all wearing, which she does. But after that, Allison demands her shirt back, and Amy demands her skirt back..so they begin to give them back to each other, when a few other girls start to enter the bathroom.

Heather can't find Erica at the dance, so she starts looking for her, and some people lead her to a staircase, where she sees Erica making out with her new boyfriend. She barges through the door, saying they're going a little fast, and that it's going for same way it did with Jason, she also expresses that Erica doesn't care about she feels before running off. 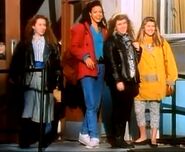 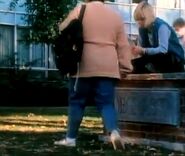