“Just Friends”
Nobody's Perfect is the sixth episode of Season 1 of Degrassi High, and the forty-eighth episode overall of the original Degrassi series. It aired on December 5, 1989.

Outside the school, Scott waits for Kathleen; when she comes out, he tells her that she's late, and he hates it when she's late. He begins pulling her hair, and telling her that no one does this to him. Kathleen promises that it won't happen again, and asks him to stop as he's hurting her; Scott says that she deserves it, then relaxes and tells her that he's sorry and didn't mean to hurt her; he says that he loves her and she tells him that she loves him too; they hug, and Kathleen forgives him, but looks a little scared.

In Mr. Walfish's class, the students are reading Romeo And Juliet aloud, with Alex reading the Romeo part; the students laugh, and Mr. Walfish tells them that he wants them to really understand the play, so they're going to continue to read it aloud; he assigns Luke and Kathleen to work together, and tells them that they'll be going first. He then chooses Joey to go second and starts looking for a partner for Joey to work with; Caitlin volunteers to work with him. On the way out of class, there's an announcement that the roles for the school play have been cast; Kathleen tells Melanie that she'll die if she doesn't get a part. She goes to check the listing, but she's not on it. Scott is there too; he didn't get a part either, and tells her that it's okay, and says that they still have each other. Kathleen says that she really wanted the part; Scott gives her a present to cheer her up, and tells her that it's for their one-month anniversary. She opens it up; it's a heart necklace. Scott puts it on her, and tells her that it's also "to say sorry... for you know..." Kathleen tells him that it's okay, and that she did sort of deserve what he did.

Elsewhere in the hallway, Liz walks down the hall and "accidentally" bumps Erica; she goes up to Spike, who says that Emma might have a little boyfriend at daycare. A guy who was walking down the hall behind Liz stops as well, and tells Spike that he likes her t-shirt, and shows her that he's wearing the same one. He then asks her out, but Spike says that she can't go out as she's busy in the evenings. He knows that she has a baby, and understands, and tells her that she can't blame him for trying. He goes, and Liz asks Spike if she really wants to go out with him, and wants to know what Spike knows about him. Spike says that she knows his name is Patrick, he's in grade 11 and he likes her t-shirt.

In the cafeteria, Kathleen sits down with Melanie and Diana and tells them that she didn't get chosen for the school play; Scott calls her over and she goes immediately. Melanie comments that Kathleen always does exactly what Scott says, but Diana is looking at him with a dreamy expression on her face. Outside in the quad, Kathleen tells Scott about another group that is having auditions for a play and says that she wants to try out; he tells her not to, saying that they'll never get to see each other. When Kathleen starts to say that it won't take up that much of her time, he tells her that he didn't want to say this, but he saw her audition for the school play, and it wasn't very good, and she's just not a good actress. Kathleen points out that she won the drama prize in Junior High, but Scott informs her that things are different in high school, adding that he's only telling her for her own good, and that he loves her.

Inside, Patrick sees Spike again, and tells her that he'd like to see her after school, if she can make it. He says that it can't be today, as he has band practice, but maybe tomorrow, they could go for a walk and then come back to the school so that she could pick up Emma. Spike says yes; he leaves, and Liz comes up, asking Spike what he wanted this time. Spike tells Liz that Patrick asked her out again, and she thinks he seems nice. Liz and Spike walk off down the hallway, and Liz starts telling Spike about her horrible first date with Joey, and what he did.

At the end of class, Kathleen asks Luke if they're going to rehearse; they talk as they go out into the hall. She tells him that she wants to do well; he doesn't really want to rehearse, and starts to walk away from her. She puts her hand on his arm to stop him, and when he tries to leave again, she puts her hand on his shoulder. They talk about rehearsing; from the doorway down the hall, Scott watches. Luke finally agrees to rehearse; Kathleen heads for her locker, and as she turns a corner, Scott grabs her and slams her into the lockers. He asks her who the guy was; she tells him that it's just Luke and they've been assigned to work together. Scott tells her that he doesn't want her flirting with other guys; Kathleen says that she doesn't even like Luke, but they have to work together; Scott tells her to get out of it, and continues to hold her up against the lockers. Kathleen tells him that he's hurting her; then they both notice that Melanie and Diana are standing there, watching what's happening, so Scott lets go of Kathleen. Kathleen looks at them and guiltily says that they were just fooling around, then runs off; Scott calls after her.

At home, Kathleen gets a dozen roses and a card that says "Sorry... I love you, Scott." She calls him, and tells him that the flowers are beautiful.

In class, Kathleen tells Luke that they have to practice for the presentation; he says that he has to go to his locker first, and he'll meet her in the drama room. While Luke is at his locker, B.L.T. comes up and asks him if he wants to practice basketball and Luke heads off with him. Scott comes up to Kathleen and asks if she wants to drive her home, but she says that she has some homework to do and it will take her about half an hour; he tells her that he'll meet her at his car in 30 minutes, then leaves. Melanie and Diana come out of the classroom and see Scott leaving; they ask Kathleen about him, and Melanie points out that he seems violent. Kathleen begins making excuses for him, and says that she deserved it anyway because she makes him mad sometimes. Melanie says that making him mad doesn't give Scott the right to hit Kathleen, but Kathleen tells them that he's the best thing that ever happened to her, he makes her feel special and he loves her; she adds that she can change him. Melanie tells Kathleen that if Scott loved her, he wouldn't hit her or hurt her.

Outside, Patrick tells Spike that he moved to Canada from Dublin, and that it's beautiful here, but he misses the greenness of Ireland. He asks Spike to tell him about herself, and touches her when he says that; she pulls back and tells him that she doesn't like to be touched. They stop at an ice cream vendor and he offers to buy hers, but she says that she'll pay for her own; he laughs and says that she can pay for his too. Spike laughs; he's happy that she finally smiled, and tells her that she's wound up tighter than a screw, and suggests that they start over, so they do by introducing themselves to each other.

At his car, Scott is waiting and getting angry. He checks his watch and then goes into the school, looking for Kathleen. Inside the drama room, Kathleen is reading her lines from the play and still waiting for Luke, who finally shows up. Kathleen tells him that he's late, and they can only practice for a few minutes. They start; in the hallways, Scott is checking the classrooms for Kathleen, and finally arrives at the drama room, where he sees Kathleen inside with Luke. Scott goes in; Kathleen tells him that she and Luke were just rehearsing; Scott asks Luke to leave and Kathleen tells him that they've rehearsed enough, so he leaves. Scott closes the door behind Luke, then turns to Kathleen and tells her that she lied to him. She says that she had to because she knew that he'd get mad if she told him the truth, and that Mr. Walfish told them that they had to practice. Scott starts throwing things; Kathleen tells him that it's important to her, and Scott tells her again that she can't act, then slaps her. He tells her that she's pathetic, then throws her up against the wall, and chokes her. He says that no one else would want to go out with her, and pulls the necklace off of her. He hits her again and throws her to the floor, calling her useless and garbage. He kicks her, then leaves; Kathleen lies on the floor and cries.

At her locker the next day, Kathleen puts make up on to cover her bruises; Scott comes up to her and apologizes for what happened yesterday. Kathleen tells him that he really hurt her; Scott tells her that he knows that, but she deserved it because she lied to him, then adds that he loves her. Kathleen asks why he hurts her; he says that he can't help it. He gives her back the necklace, which he fixed for her and wants her to wear it again, but Kathleen walks away without taking it. Scott follows her and asks where she's going, and tells her that he needs her. 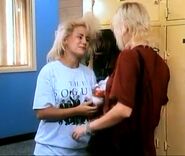 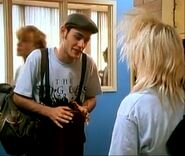 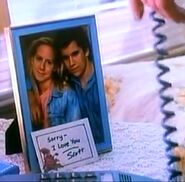 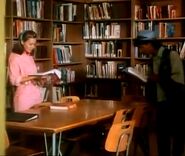