“Eggbert”
Revolution! is the thirteenth and final episode of Season 1 of Degrassi Junior High. It aired on April 12, 1987.

When Wheels doesn't want to go on a date with Stephanie she tries to make him jealous by going out with Joey. Meanwhile, the 7th Graders don't like that Stephanie has given Joey a 7th Grade job.

Stephanie is walking when Joey hits on her again. She says that Joey's a nice guy, but he's not the kind of guy she'd go out with. Stephanie still has a huge crush on Wheels. Kathleen, Arthur, Melanie and Yick are sitting in the halls when Stephanie walks by. They say she's the worst school president and mentions she hasn't replaced the sports rep position yet. They all say Yick should go for the position.

Stephanie asks Wheels out. He says no because he has to study and Stephanie is heartbroken. She decides she's going to make Wheels jealous by going out with Joey. Yick asks Stephanie to be sports rep and she blows him off.

While Joey, Wheels and Snake are practicing for their band, when Stephanie comes in and asks Joey to be sports rep. Yick is in the bathroom when Joey says he's the new sports rep. The 7th graders hear the news and are outraged. They start a campaign to impeach Stephanie. Meanwhile, Wheels overhears Heather and Erika saying that Stephanie is using Joey to get back at Wheels.

Joey asks the twins if Stephanie is using him and they say yes. The 7th grades gather around her locker to protest. Joey walks up and resigns as sports rep. Stephanie goes into the bathroom and remembers all of the things she's said and done over the semester. "Why do I have to always mess things up?" she says. As she leaves she asks Arthur to walk home together. She admits she made a lot of mistakes."Next term is going to be completely different," she says. 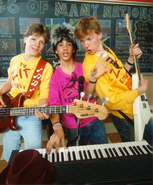 Retrieved from "https://degrassi.fandom.com/wiki/Revolution!?oldid=2834705"
Community content is available under CC-BY-SA unless otherwise noted.