Sealed With a Kiss

“Sealed With a Kiss”

“Dog Days”
Sealed With a Kiss is the eighth episode of Season 2 of Degrassi Junior High, and twenty-first episode overall. It aired on February 22, 1988.

Everyone is excited about the school dance; Erica hopes that she'll meet a guy at the dance, but Heather is just looking forward to hanging out with friends. As they talk about the dance, Erica watches Alexa walk by with Simon; she asks Heather if she thinks that they French-kiss? Heather thinks that's gross, but Erica thinks it's romantic. The night of the dance, the kids from St. Mary's are there; Erica meets a cool, older guy named Aaron, and goes off to talk with him. They sit in the stairwell, and she tells him how much she dislikes being a twin. She says that she's sick of people thinking that she and her sister are interchangeable, and just for once, she'd like to have a birthday to herself. He looks into her eyes and tells her that she's beautiful; they begin kissing. Heather and Alexa come looking for Erica; they get to the doorway to the stairwell and see Erica with Aaron; Heather leaves, but Alexa is amazed by the way that they're kissing and has to be pulled away.

That night, at home, Erica tells Heather that she's too young to understand what it's like; Heather points out that she's only six minutes younger, but Erica insists that Heather is much too immature to know what it's like to have an adult relationship.

The next day at school, Erica tells Heather and Alexa that Aaron is really nice, and his father has a convertible; he's in high-school and can drive, and offered to take her out in the car. They want to know why he was at the dance, and Erica says that he had a friend who was there. In English class, Mr. Raditch hands out assignments to pairs; he puts Heather and Erica together, but Erica tells him that she'd rather be partners with Alexa; Heather says that she'll be partners with Stephanie. After school, the pairs work on their assignments; Erica and Alexa have "Mononucleosis" as their topic. Erica is wearing a scarf around her neck because she has a sore throat, and she tells Alexa that she doesn't feel well; she has a fever. Alexa reads the symptoms for Mono, and they match how Erica feels exactly. Outside Ms. Avery's classroom, Joey and Snake are waiting for Wheels; Ms. Avery has told him that his marks are getting better and he might be able to stop having the extra tutoring. Wheels comes out and tells Snake and Joey that he's a free man.

After school, Erica is lying in bed; Heather tries to talk to her, but Erica just doesn't feel like talking. The doorbell rings; Heather answers to see Aaron standing there. He calls her Erica, but she tells him that she's Heather; she goes upstairs to get Erica, but Erica just says that Heather should tell Aaron that she's not feeling well. Heather does this, and Aaron asks if she wants to go for a ride with him instead, telling her that she's pretty much the same as her sister, right? Heather is unwilling at first, but when he tells her that Erica said she was not spontaneous at all, she changes her mind. He takes her for a ride, and pulls over to talk. He assumes that she feels the same way that Erica does and doesn't really listen when she answers his questions differently. He uses the same "You're beautiful" line on her that he used on Erica and kisses her. Heather seems willing to kiss him at first but then pulls back and tells him that they shouldn't. He doesn't want to stop; Heather tells him to take her home.

Meanwhile, Joey and Wheels are at the local hang out, having shakes. Snake comes in and tells them that he won't be able to practice with them after school because he's been taking classical guitar lessons. At first he didn't like it so much, but now he's really enjoying it and wants to continue with it. It's two nights a week, so he doesn't think he'll be able to stay with the Zit Remedy.

When they get back to the house, Heather storms into the house, ignoring Aaron when he suggests that all three of them could go out sometime. Erica, who saw Heather leave with Aaron, finally tells Heather what the real problem is, and Heather tells Erica that Aaron kissed her too. They both go to a clinic to get tested for Mono, and find out that Erica has tonsillitis. 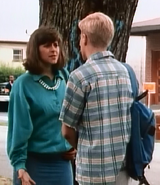 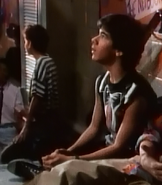 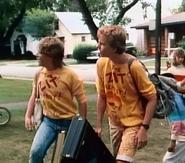