“All in a Good Cause”
Sixteen are the ninth and tenth episodes of Season 1 of Degrassi High, and the fifty-first and fifty-second episode overall of the original Degrassi series. Both parts aired on January 9, 1990.

Michelle opens a birthday present from her father; it's a ring, and he tells her that it was her grandmother's, and she wanted Michelle to have it when she grew up. He tells her that it's valuable, so to be careful with it. He heads out for work, but before he goes, Michelle asks if he'll change his mind about letting her go out with her friends tonight. He tells her that the rules are that she can't socialize on weeknights.

As she goes into the school, Nancy, Tim and Maya all wish Michelle a happy birthday. Patrick catches up to Liz and Spike; he calls Spike his musical muse, and explains that he wrote a song for her. Inside the school, Simon and Alexa decorate Michelle's locker, then hide before she gets there, and jump out wishing her a happy birthday when she gets there. Alexa asks how it feels to be 16; Michelle says she doesn't feel any different, and shows them the watch that her mother sent her, and the ring that her father gave her. She tells them that it's ironic that her father gave her the ring because she's grown up, but still treats her like a child and won't let her go out on her birthday. Outside, in the quad, Patrick sings the song that he wrote for Spike, which includes the lyrics, "I love you..." He says he has to get to class; Spike tells Liz that she liked the song, and that he's nice. Liz seems a little envious of Spike and comments that it must be nice to have a song written for you, but Spike doesn't seem so sure of that.

Inside the Resource Centre, B.L.T. gives Michelle a necklace; she calls Alexa over and shows her. Alexa and Simon sit down; Michelle tells them that she wants to go out with them tonight, but her father is still saying no. B.L.T. asks if it's because of him. Simon points out that it would be better if Michelle could live with her mother, but Michelle says that her mother has moved to Calgary and besides which, she doesn't like her mother's boyfriend. Alexa says that Michelle should move out on her own, and B.L.T. points out that it's legal, now that she's 16. Ms. Avery comes over and asks them to be quiet; Michelle whispers that it would be amazing if she could live on her own, and the other three all say, "Party!"

In the hall, the twins ask Lucy to come to the mall with them, but Lucy says that she's going to the hospital to visit L.D.. They say that they'll go with her, but Lucy looks uncomfortable and says no. The twins want to know why not, and Lucy tells them that L.D. doesn't want people to see her in the hospital. Joey teases Snake, saying that he'll never pass the driving course, then adds that he'll pass because his father has let him drive, or steer the car since he was 12. The driving instructor comes in, and tells them that they don't know it all, and asks what the first thing they should do is when they want to drive. Joey says, "Start the engine," and laughs, but the instructor tells him that he's wrong. Nancy says that you should check the car first, making sure that the tires are okay; the instructor tells her that she's right, and starts explaining that driving isn't a right, it's a privilege.

At the hospital, Lucy arrives, and sees L.D. putting on her wig. L.D. tells Lucy that she's okay, and Lucy says that everyone is asking about her, and wants to know what she should tell them. L.D. starts to answer, but then breaks off and starts crying. Lucy asks what's wrong, and L.D. sarcastically tells her that she's got leukemia, and she's lost all her hair, but other than that, everything is peachy-keen. She tells Lucy that she's going to be in the hospital for at least another month, and she'll have her 16th birthday there, which really upsets her.

Outside, Michelle and B.L.T. walk home from school. She tells him that it's not very exciting to spend her birthday with her dad; B.L.T. says that she doesn't have to listen to her dad any more, and she should just tell him that she's going out. From inside the house, Michelle's dad looks out the window and sees her talking to B.L.T., then sees her kiss him. Michelle comes in to the house, and tells her father that she wants to talk to him; he tells her that he saw her with "that boy." Michelle asks if he was spying, and he informs her that spying wasn't necessary, since she kissed him in front of the whole street. Michelle tells him that he's the only one who seems to care; her father tells her that she needs to find another friend, and Michelle asks if he means someone who's white. She then calls her father a racist; he insists that he won't be disobeyed, and tells her that she's grounded, and that she must follow his rules. Michelle says no, and he tells her that if she doesn't like it, she can leave. Michelle starts up the stairs and says that's exactly what she's going to do; her father tells her not to be ridiculous, but Michelle runs upstairs and starts to pack. Later, at the front door of Alexa's place, Michelle rings the bell. Alexa answers, and Michelle tells her that she had a big fight with her father and left home.

Liz and Spike walk to school; Patrick says hi, and Spike walks away. She tells Liz that she doesn't want to talk to Patrick or about him. Liz wants to know what's wrong, and tells Spike that she thought they were friends and could talk. Spike admits that she likes Patrick but is afraid that she might like him too much, and that maybe the whole thing is too perfect and what will happen if he leaves. Liz insists that he won't leave, but Spike points out that she's short, she's a mother and those things don't make her very attractive. Elsewhere in the hallway, Lucy sees the twins, who ask about L.D. again. At first, Lucy doesn't say much about L.D., but then tells them that she has leukemia and is really depressed. Lucy says that she's been thinking about making a video for L.D. to cheer her up, and asks if the twins want to help. They ask if L.D. is going to die, and Lucy says that she has a 70% chance of survival.

In the library, B.L.T. says he'd have loved to have seen Michelle's dad's face when she told him; Alexa says that Michelle can stay at her place as long as she wants, but Michelle tells them that she needs to find her own place to live, and that she's going to start looking immediately. Alexa, Simon and B.L.T. are surprised, but Michelle tells them that this is the new her. After school, the four of them go out and look at apartments. They discuss how expensive the apartments are; Michelle calls one place, but the woman only speaks Greek, and Alexa says that she'll help with the translations. They check different places, some in large buildings, some in small buildings and some that are on top floors with no elevators.

In the student driving car, Snake is about to start the car when the instructor stops him and has him check the mirrors first. He then starts the car and shoots forward, then stops. The instructor tells him to relax; Snake tries again, but is still jumping forward and going too fast; he hits all the signs and cardboard cutouts of pedestrians; in the back seat, Joey is laughing and Nancy is screaming; the instructor is shouting for him to slow down. Snake finally stops, after knocking over everything on the driving course.

Michelle calls another place, and arranges to see it; she reads the ad as they approach, and says it sounds good: one bedroom, shared kitchen and bathroom. While she and Alexa look around inside, Simon and B.L.T. wait outside. When they come out, Michelle says that it's perfect, and wants to get it. Alexa points out that she'll need $500 immediately, as the woman won't hold it past today. Michelle says that she can sell some stuff; Simon says that she'll have to sell a lot of stuff; Michelle looks at the ring that her father gave her for her birthday, and says she could just sell one expensive thing. They don't want her to do that, but Michelle says that she's not going to let her father win this time.

At school, Joey is telling Wheels about Snake's driving and Snake tells him to shut up; Patrick calls to Spike, who starts to walk away, but Liz tells her to talk to him. She sits with him and he tells her that she can't cut herself off for the rest of her life, and that he'd be hurt if she decided that she didn't like him. Spike is shocked that Liz told him what she said, but Patrick tells her that she has to take a chance, and that's called living. She tells him that it was quite a speech, and he admits that he was up all night thinking about what he wanted to say.

At Michelle's new place, B.L.T., Simon and B.L.T.'s dad help her move in; Michelle and Alexa are in the room, arranging things and hanging clothes in the closet. Michelle tells Alexa that her dad was really mad when he found out what she'd done with the ring, but she says that she doesn't care, as it's her ring, and she can still buy it back because the pawn shop has to hold it for a year, and once she gets a job, she'll have some money. Simon and B.L.T. bring in the mattress and say that that's the end of things from the car; Simon says he has to go to an audition and Alexa leaves with him. From outside, B.L.T.'s dad honks the horn, and B.L.T. says that he has to go too; he hugs Michelle and tells her that she did it, then asks if she'll be okay. Michelle says that she's fine, and wants to be alone for a while anyway, to get used to it. Once he's gone, Michelle stands looking out the window, then throws her arms in the air and twirls around. 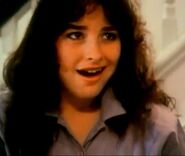 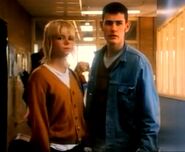 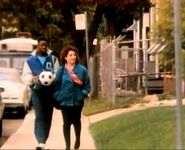 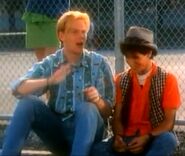 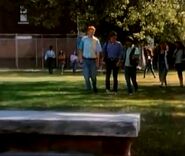 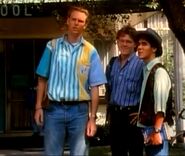 Add a photo to this gallery
Retrieved from "https://degrassi.fandom.com/wiki/Sixteen?oldid=2874585"
Community content is available under CC-BY-SA unless otherwise noted.