“Fight!”
Stage Fright is the fifth episode of Season 2 of Degrassi Junior High, and the eighteenth episode overall. It aired on February 1, 1988.

Caitlin is in a doctor's office with electrodes hooked up to her. The doctor is telling her to breathe in and out. She has epilepsy.

Joey sees Michelle in the hall. He sneaks up behind her and scares her. Alexa tells her to stand up for herself, but Michelle says she's too shy. Susie is excited to see Caitlin is back and can come to her sleepover. Melanie wants to invite boys over and Kathleen says "You're such a sex-starved maniac!" Melanie then says "Kathleen, you're such a prude!" Susie tries to talk to Caitlin, but Caitlin was busy staring off into space.

Michelle finds out she has to give her speech on Tuesday. Joey continues to make fun of her by making squeaking noises. "I gotta get out of that speech!" Michelle says. Alexa tells her it's only 3 minutes of her life and Michelle says "That's 3 minutes too long."

Auditions for the play are in the gym and Caitlin goes first. Michelle figures out a way to get out of her speech. Afterward, Susie catches her in a daze again. Susie thinks Caitlin still might be sick, but Caitlin insists she's fine. Caitlin overhears her parents talking about her epilepsy. As she grabs her bag for the sleepover, she forgets her medicine.

Caitlin, Susie, Kathleen, Melanie and Jyoti are at the sleepover. They are doing a seance, and when they turn on the lights, Caitlin is dizzy. All of a sudden she has a seizure and the girls think she's joking. Susie then realizes she's having a seizure and takes action. The rest of the girls sit there, not knowing what to do.

Caitlin returns to school and her mom reminds her how important it is for her to take her medicine. Rick overhears Kathleen telling people about Caitlin's seizure. The cast list is put up and Kathleen got the lead of Isabelle. Caitlin learns she's Elizabeth: Isabelle's servant. Michelle goes up to Mr. Raditch and tells him that she can't give her speech because she has lost her voice. Raditch doesn't fall for it and tells her to talk about something she knows.

Caitlin is convinced she didn't get the part because she has epilepsy. Discouraged, Caitlin goes home. They cast is practicing the play and when Caitlin is supposed to speak, she's nowhere to be found. At home she tells her parents that the play is stupid and says "I don't want to be Kathleen's servant!"

Everyone heard the news about Caitlin dropping out of the play, and are excited to see her at the dress rehearsal. Caitlin says she'll be the best servant Kathleen's ever had. A light shines on Caitlin and she looks up to see Rick had plugged it in. "Welcome back," he says. 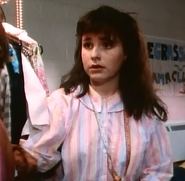 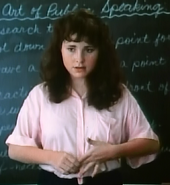