Teendr is a dating site first seen being used by Tristan Milligan in I Wanna Be Adored.

In I Wanna Be Adored, Tristan shows Zoë Rivas his Teendr profile and tells her about how little attention he is getting. Grace Cardinal later joins the conversation and both she and Zoë agree that he should give his profile a 'makeover'. With his 'makeover' he instantly gets someone's attention and ends up on a date with them. He and Gage end up revealing to each other that what they put on their profiles wasn't exactly the truth.

In #BuyMePizza, Tiny and Lola get in a fight when Tiny finds out Lola still uses Teendr despite the fact that they're dating. He finds out when Zig sees Lola on Teendr. Lola defends herself by saying she only uses it to make boys order her pizza. Lola asks Shay and Goldi if its okay for her boyfriend to make her delete an app. They say of course not, until they find out its Teendr. Lola leaves to talk to someone who had a boyfriend. Lola asks Frankie if she still has it. Frankie says she obviously doesn't because she has a boyfriend. She then breaks up with Tiny and goes on to Teendr to find more boys to order pizza for her.

She gets back together with Tiny and then the boy who she asked to give her pizza shows up and fights Tiny.

Confirmed Characters that Use Teendr 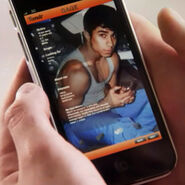