“It Creeps!!”
Testing One, Two, Three... is the thirteenth episode of Season 1 of Degrassi High, and the fifty-sixth episode overall of the original Degrassi series. It aired on January 30, 1990.

Joey's school problems have not let up, and now that he's in high school, he's finding it more difficult than ever to keep up. The tests indicate that he has dysgraphia, and Joey figures if he's going to be some kind of moron, he might as well drop out. Caitlin is terrified about her upcoming court appearance, and Claude is no help at all. Alex gets a hold of last year's science exam.

Joey is working on a paper that has to be turned in today for Mr. Walfish, Snake is rushing him to finish it up and turn it in so they can can go take their driving tests. Walfish announces he's proud of the students on their progress, but he wants to speak to Joey after class, who got a poor mark. Joey however passed his driving test, revealed as he's congratulated by classmates before talking to Walfish, who tells Joey that he wants Joey and his parents to meet with him and his psychologist to discuss his problems.

Claude approaches Caitlin in the hall, who is still annoyed about him ditching her at the protest. Claude asks her to forgive him, because he's really sorry, but she says she'll only forgive him if he comes to the court hearing. Maya apologizes to Caitlin because she isn't able to come to the court to support her due to a doctor's appointment, and makes sure Caitlin isn't making up with Claude, but it turns out that Caitlin just wants someone there to support her. Joey approaches Caitlin, and mocks her about dumping Claude, who gets upset and walks away.

Tessa is struggling in science- as are many others to her knowledge, except for Alex of course. Tessa is desperate. She's afraid she's going to fail the test and the course as well. She is having to take the course in summer school to make up for it, so she approaches Alex pleading for help. Alex is hesitant, but with Tessa's insistence, he reluctantly agrees, but she has to promise to not breathe a word to anyone. Alex tells Tessa that his brother had their science teacher, Mr. Webster, three years prior, and kept all his tests, and Webster uses the same tests every year. They plan to meet in the library to photo copy the test.

Wheels, Archie and Joey are in the lunch line when Dwayne bumps into them, Joey is annoyed and when Dwayne walks away he makes fun of him, saying he's dumb and imitating a monkey. At the meeting, it's revealed Joey has dysgraphia, a learning disability in which his brain does not instruct his hand to write correctly, he's recommended to take a special education class just one period a day.

Tessa spills the test to Scooter when seeing him struggle so much... who then leaks it to Yick and Luke, and eventually just about the whole class is seen to have the test answers. They all take the test, looking very elated and confident, which makes Mr. Webster a bit suspicious.

Joey is upset he has to take special education classes, and qualifies himself as stupid and dumb, and he plans to leave school. He's cleaning out his locker when he is approached once again by Dwayne. Dwayne tries to mock Joey by imitating a monkey, and asking if it's funny, and continues to imitate. Joey gets annoyed and starts to push him, and then a fight starts, of which Dwayne lands a suspension and Joey detention. Claude approaches Caitlin again in the hall, saying that he can't go to court with her as planned, because his parents said he couldn't. Caitlin figures his parents would say no, and it's the only reason he mentioned it to them. Claude starts to make up excuses, like if the security guard was there, if he recognized Claude. This just angers Caitlin even more and she asks if he mentioned it was his idea to vandalize, or that he ran when she got stuck, she swipes at his face when he tries to grab her arm, giving Claude a bloody nose, and landing Caitlin a detention.

Joey sees Caitlin in detention with him and asks, "What's Miss Goody-Two-Shoes doing in detention?" Joey starts to insult Caitlin regarding her relationship with Claude and he gets offended when she strikes back and calls him dumb. She keeps calling him dumb and then Joey tells Caitlin that he has a learning disability and he also says that he's going to leave school after the day ends. Caitlin tells him that he's not dumb and that if he left school it would be a dumb idea, which causes Joey to re-think his decision, and he decides to change his mind and not leave school. The next day, Maya approaches Caitlin and says that she'll come to the court with Caitlin to give her support, she cancelled her doctor appointment.

Mr. Webster enters science with a new test for the grade nine's. Just about everyone got perfect scores on the test the prior day, which supposedly lead him to think they were too smart for the test and he needed to make a more advanced test, which he did. This test would nullify the prior test scores, given they were so easy. Caitlin turns around to hand Joey his test, and they smile at each other. 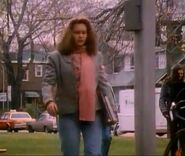 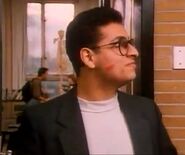