“If You Leave”
The Bitterest Pill is the twelfth episode of Season 6 of Degrassi: The Next Generation. It aired on January 9, 2007 in Canada and on February 2, 2007 in the United States.

In the shock of death and loss, everyone at Degrassi reels with grief as they try to understand what kind of memorial their friend would have wanted and whether the dead's secrets should be kept secret.

This episode starts at J.T.'s emotional funeral. In shock over his death, the grief-stricken students plan to throw a memorial at Degrassi to best honor their friend, but even with their friend gone, a secret is still lingering about J.T's feelings about Liberty.

Toby must decide if the secret is better left unsaid or if needs to be revealed. Mia, Toby, and Liberty go to J.T.'s locker and then Mia starts to grab everything and puts them in her bag. Liberty and Toby are curious as to why Mia was grabbing everything.

Mia then tells Liberty that she basically doesn't care about J.T., that she didn't even shed a tear at his funeral and she told her what J.T. called her behind her back.

Liberty walks away mad & then Toby grabs everything from Mia's bag and places it back into the locker.

Later on, Toby grows closer to Liberty, but Manny to break it off because he knows how J.T. felt about Liberty.

At the memorial, Mia asks Toby to play the video of J.T. playing with her daughter and goes on to insult Liberty, saying that J.T. hated her.

Toby tells Mia that J.T. still loved Liberty and was going to tell her before he got stabbed. Liberty overhears and allows Mia to play the video. As it plays, Liberty finally breaks down and cries.

At the end of the episode, Mia, Liberty and Toby clean out J.T.'s locker together.

Meanwhile, Ellie tries to decide if she should tell Jesse about the kiss she shared with Craig.

After some urging from Ashley, she decides to come clean when Jesse gives her a handmade coupon book with a note saying he loves her.

After Ellie tells the truth, Jesse reveals that he was also unfaithful, but to a much higher degree than a kiss.

He says that he was at a bar after not seeing Ellie for weeks and hooked up with a girl he met there, although he assures Ellie that he didn't sleep with the girl. Ellie is furious and storms out of the Core office.

Ellie later gives Jesse a box full of his things and he chases after her, trying to apologize. He admits that it hurts to know that she kissed someone she had been crushing on forever.

He then asks Ellie if she loves him and Ellie becomes flustered and heads to J.T.'s memorial without answering Jesse.

While at the memorial, Ellie interviews Jimmy and he spreads some wisdom to her, saying that all the drama and tears in your life is worth it if you're lucky enough to find someone who loves you.

The next day, Ellie is seen at the Core office handing in her article about J.T. She then reveals that she fished Jesse's coupon book out of the trash, revealing that she forgave him for what he did. 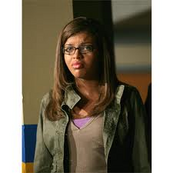 Retrieved from "https://degrassi.fandom.com/wiki/The_Bitterest_Pill?oldid=2822121"
Community content is available under CC-BY-SA unless otherwise noted.