“The Time of My Life”

“Summertime”
The Time of My Life are the thirty-ninth and fortieth episodes of Season 12 of Degrassi, as well as the hour-long season finale. It aired on June 21, 2013.

Imogen and Eli are rushing to meet Fiona, who has asked them for some last minute additions to prom. On the way, Imogen trips and her report card falls out of her bag. To Eli's surprise, she hasn't opened it yet. Imogen has flunked all her classes and will have to repeat her senior year. They meet up with Fiona and Imogen is amazed by her work on prom.

Later at Fiona's house, Imogen is debating whether she should wear her hair up or down. Fiona tells her to wear it up so she can show off the necklace she made for her. When Fiona brings up graduation, Imogen lies on her bed and cries. She reveals to Fiona that she has failed her classes. Fiona is understanding, but just as they kiss, Fiona's mother enters the building, and is no longer on house arrest, meaning the Coynes are rich again. This itself isn't the good news, as it turns out a famous fashion designer, Federico Cavalieri, is interested in Fiona's work. Imogen is thrilled, that is until she finds out Fiona will have to move to Italy. Imogen can’t imagine saying goodbye to Fiona.

At prom, Imogen, Fiona, Bianca, and Drew are sitting at the same table discussing Cavalieri's offer. Bianca and Drew seem supportive, and Fiona seems interested, surprising Imogen, who thinks it is a terrible idea. Imogen is distraught at the idea of losing Fiona. Fiona tries to cheer Imogen up, but leaves to announce Prom King and Queen, leaving her purse with Imogen. While she is away, Fiona's phone rings and Imogen sees that it is Cavalieri. Without thinking properly, she impersonates Fiona and schedules an appointment on prom night.

Imogen arrives and pretends to be very drunk, even grabbing Federico's wine glass. Thinking she is Fiona, Cavalieri leaves outraged. Imogen returns to prom and finds Fiona looking for her. She tells her that she went home to check on her dad. While talking, Fiona gets a call from her mom. While she talks, Imogen leaves, afraid, and asks Bianca and Drew for advice. Before they can give her any, she sees Fiona looking at her angrily. When she walks over to talk to her, Fiona tells her that Cavalieri called her mom and told her that she was drunk, and because of Fiona's past, her mother called rehab. Imogen tries tell her that they can straighten things out, but Fiona tells her that he has already arrived at the airport, and leaves to enjoy prom as best she can without her. Imogen runs to the closet and cries, where Eli and Clare run into her discussing something (see below). Eli tries to comfort her and she realizes what she has to do. Imogen rushes to the airport to explain everything and show Cavalieri Fiona's artwork. There, Cavalieri is surprised to see her and hear her story, and reluctantly decides to give Fiona a second (or first) chance.

The next morning, Imogen tells Mrs. Coyne that she re-scheduled the meeting, and apologizes. As she leaves, Fiona stops her and accepts her apology. They make up and go to graduation. Unfortunately, Imogen breaks up with Fiona after her valedictorian speech. The two share a last kiss and a teary-eyed smile as Fiona returns.

Clare attempts to move on with her life without Eli, but he is not ready to let her go and, like Imogen, goes to great lengths to preserve their relationship. Will it be too late? At the beginning of the episode, Clare, with Alli and Jenna, are picking out prom dresses. Clare then explains that she is not going to prom because of Eli, who wanted space from Clare to cope with the suicide in the first place. Later, a guy, Cliff, from Clare's history class, walks up to the dresses and agrees with Alli saying, "'She's right, you know?'". Clare scoffs, asking if they even met, with Cliff saying he is from her history class. After that, Jenna interrogates Clare about the people who want Clare and Eli together, and mentions that they are finalists for Prom King and Queen. Clare demands for the last time, that she and Eli are done.

Meanwhile, the girls, with Clare deciding to go, get ready for prom. Clare seems excited and wondrous about Cliff. While Alli zips up Clare's prom dress, she notices there's a sort of lump on her back, and Jenna responds that Clare should get that checked out, even adding the fact that it might be cancer. A few seconds later, Clare's "prom date" shows up, and she begins to panic. Her "prom date", (Eli in a carriage) shows up to take Clare in to prove her wrong about them not being a fairy tale. Cliff then shows up, puzzled that Eli is there, and Eli, also puzzled, asks Cliff, "'Who are you?'". Cliff retorts, "'Cliff, her prom date...who are you?'" Eli replies, "'Eli, her... soulmate.'" Cliff begins to look disapproved.

At prom, Cliff and Clare are dancing, with Clare being relieved that she's only known Cliff for 12 hours and he hasn't broken a commitment, labelling Cliff as "best prom date ever". Cliff, still slightly confused, resorts to asking about Eli and the carriage, saying it was romantic. Clare gets mad about Eli not being romantic as he broke up with her after telling her he was all in, which broke their plans for after Eli's graduation. Cliff, not bored from Clare's explanation of their relationship, states that it's clear she still loves Eli, so what's the problem? Prom King and Queen is announced, and the winners are Eli Goldsworthy and Clare Edwards. Once again, Clare starts to panic, and runs.

Later, Eli finds Clare crying out of prom, asking if things went wrong with her date. Clare commands that Eli should really stop trying to win her back. Eli explains that he was messed up after Cam and that he wasn't thinking, and he still likes Clare. Then, he talks about his departure for New York University occurring the day after prom, having Clare slightly shocked that they have only a night left.

Back together, Eli and Clare are dancing, and after a short conversation, they talk about what kids do on prom nights these days, having the conversation lead to people having sex, and the couple begin to look astonished at each other. A while after, Imogen seems to be crying about Fiona, and Eli and Clare are getting it on near Imogen's area. They catch Imogen crying, and Eli suggests that Imogen should help Fiona get the job, as it is better than no girlfriend at all. In the meantime, Eli and Clare venture to a rented hotel room, and Clare is convinced that it won't be a disappointment, and the couple sleep that night.

At graduation, Eli is labelled as "Winner of the Drama Prize". In the meantime, Alli walks in on Clare in the bathroom, talking about cancer, and the nosebleed earlier in the morning, and that the doctors want to do a biopsy. Lastly, before everyone tosses their caps Eli and Clare agree to keep up the plan for the next school year to fly by, and be in New York together, and the group of seniors toss their caps, with Clare ending her time with Eli at Degrassi on a good note.

Mo wants to lock down a "bromance" with Jake before the summer, but by doing so jeopardizes his relationship with Marisol. In the start of the episode, Mo and Jake are seen just finishing up cleaning out their lockers, and Mo notices Katie and Marisol, excited about prom but slightly upset that it's their last night together before graduation, and no more hanging out together. Then, Mo says to Jake that it seems pretty crazy that it really is the end, but they still have prom night. However, Jake responds that he is not going to prom, leaving Mo upset and mopey, even leaving Marisol disapproved of his attitude. Mo, worried, complains to Marisol that he and Jake might never talk again after graduation. After suggesting to lock down a bromance, Marisol threatens Mo that if he frowns once at prom, she'll make him eat a corsage.

Mo, still unhappy at prom, gets a picture with Marisol, having her mad about his "smile". In a serious mood, Marisol suggests that if Mo can't just pretend not to be sad, he should just go home. Being mad as well, Mo nearly walks out of prom, until Jake suddenly pops up, transforming Mo's mood into excited to be at prom.

After announcing Prom King and Queen, Mo and Jake attempt to steal some other couples cakes successfully. The two enjoy the cakes, and Mo exclaims that he's glad Jake came, and Jake replies that it was even the best deal ever. Mo, confused, asks, "'What do you mean deal?'". Amazed, Jake talks to Mo about Marisol paying him 50 bucks just to sit at their table to fill one of the empty seats so the guys don't look like losers. Mo, now enraged, jumps to conclusions saying that he's glad to know what Marisol thinks so highly of him, and he ditches Jake.

Meanwhile, Mo gets drunk with Owen and Dallas, as he doesn't believe it's romantic that Marisol paid Jake to come to prom with them behind his back, and Marisol's requested song for her and Mo starts playing. Later, Mo being drunk approaches an enraged Marisol yelling about him missing their song and not dancing and getting drunk. Mo replies, "'Yeah, whatever...''". Marisol interrogates Mo as to what's wrong with him,  and says that the only reason she paid Jake to come here was because he didn't want to share his feelings with him, so she came up with a scheme. When Marisol starts to run off, Mo abruptly asks her to wait, and he accidentally pukes on her twice. Mo asks if they could talk about this, and Marisol retorts with a sharp "no", and Mo pukes again.

In the meantime, Katie and Jake are talking about what they will do in the fall after summer and graduation, with Katie saying that she will be living her soon-to-be-difficult life at Stanford, while Jake is mushroom picking, wondering what might happen next. After a moment of silence, the two kiss, and Mo rushes up to them, asking for advice for Marisol to forgive him. Katie says he is going to have to do something big.

At graduation, after the awards and diplomas are received, and after Fiona makes her valedictorian speech, the lights dim, and Mo stands up, nervously looking around the gym at the huge crowd, and begins to sing Marisol's requested prom song for them. Marisol is astonished, and says she will not forgive him until he tells Jake how he really feels about their friendship. Mo finally budges after wishing Jake a great summer, and Jake suggests that perhaps their future kids could play together. When they toss their caps, the group of friends reunite once and for all. 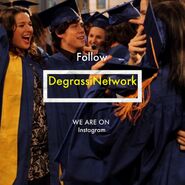 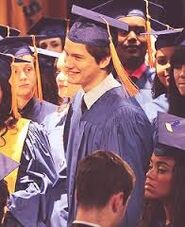 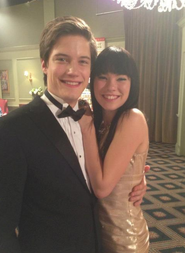 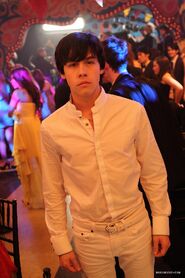 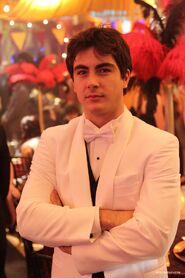 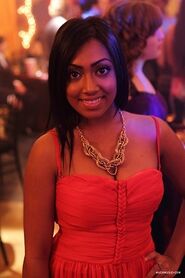 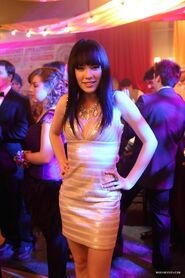 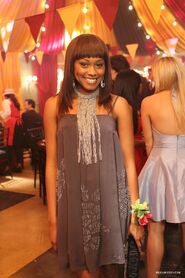 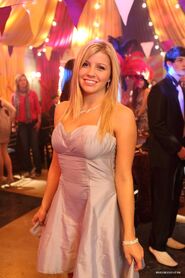 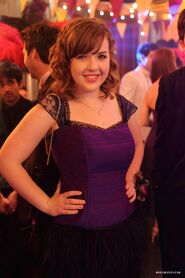 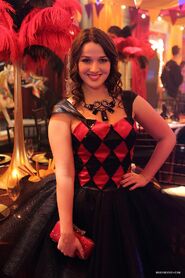 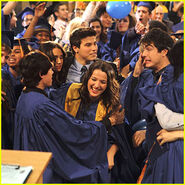 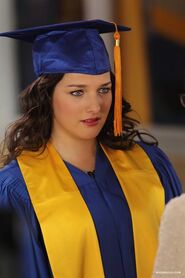 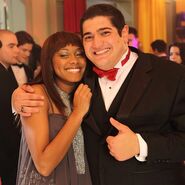 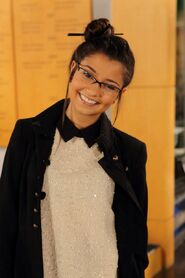 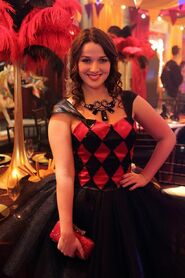 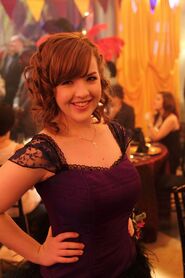 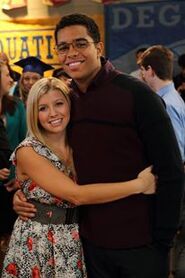 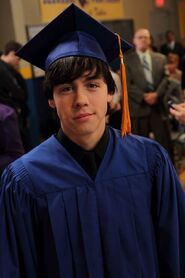 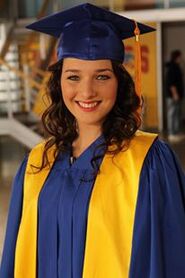 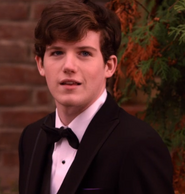 Retrieved from "https://degrassi.fandom.com/wiki/The_Time_of_My_Life?oldid=2898608"
Community content is available under CC-BY-SA unless otherwise noted.