“Star-Crossed”
The Whole Truth is the seventh episode of Season 3 of Degrassi Junior High, and the thirty-third episode overall. It aired on December 12, 1988.

Spike is helping Liz hang posters for a protest against the experimental and slaughter use of a monkey. As the editor, Caitlin thinks the Degrassi Digest should tackle more real and hot stories. Joey is hopeful to get the Zit Remedy demo to the product manager of CRA-Z radio, sanitary engineer is a start.

When Caitlin sees Spike and Liz hanging up posters for a protest, she acts what it's about and Liz tells her it's for a monkey who is being used for experiments and then is going to be killed, she tells Caitlin she should come. Everyone but Kathleen has their articles in for the Digest when Caitlin says she wants more real and hot articles. Kathleen gives her article to Caitlin, which is about a dress code for Degrassi, she doesn't want to publish it, but she's obligated. Caitlin confronts Liz, she wants an article for the Digest about the protest, but Liz doesn't like writing. Caitlin agrees to meet with Liz after school so she can get information and write the article instead. Caitlin tells Trish and Melanie that she's going to be doing an article about the protest, Trish is hesitant because there's no room, but Caitlin insists they just replace Kathleen's article. Liz tells Caitlin a lot about animal cruelty and how they're just used as test subjects because it's cheaper, and diseases given diseases just to see what happens to them. They're watching a film about the torture when Caitlin suggests they should do a whole series of articles rather than just one, get the school involved. Trish resigns from the digest, because if they boycott the make up companies, her dad could lose his job, and she said her father said they don't test on animals anymore. Caitlin tells Liz she isn't going to go to the protest because the monkey is being used to test things as brain disease--her epilepsy drugs were tested on monkeys.

Joey announces to Snake that the Zit Remedy is going places, that he got a job at CRA-Z radio. Snake still doesn't believe their band is going anywhere, and asks Joey what the job is. When Joey says he's a janitor, Snake just laughs and mocks him. As Joey is leaving school, B.L.T. and Snake mock him about his job again, Joey walks off and they talk about them wanting a job too. The receptionist is annoyed with Joey when he keeps leaving his demo on the program manager's desk, she warns him about keeping his job. A worker tells Cindi, the receptionist they need more upbeat music before leaving, Joey smiles. This time, Dr. Sally found a Zit Remedy demo on her desk, and Cindi confronted Joey again, he's not doing his job and she told him they had to let him go. Cindi leaves for a moment and Dr. Sally comes out to tell Joey she enjoyed his demo, and told him to keep working on it. 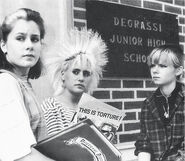