“Taking Off (1)”
Twenty Bucks is the tenth episode of Season 3 of Degrassi Junior High, and the thirty-sixth episode overall. It aired on January 30, 1989.

Melanie's fondest wish comes true when Snake invites her to the Gourmet Scum concert, Dutch. The only problem is, where will she get the money? Her mom won't give it to her—not voluntarily, anyway. Joey makes a bet that he can get a date for Friday night, but finds it a little harder to manage than he thought it would be, and Caitlin is not thrilled when she finds out she wasn't his first choice. The tension gets worse between Shane and Spike when she finds out that he is withholding child support to buy concert tickets.

Melanie gets her braces off, she's so happy that she meets some friends at the pizza parlor and buys all of them pizza and sodas with her twenty bucks of babysitting money. At school, Snake asks out Melanie to the Gourmet Scum concert, however she needs to get another twenty bucks for her ticket. With money tight, Melanie's mother is not able to spare twenty dollars to Melanie, so she goes into her mother's purse and steals a twenty, planning to pay it back after babysitting. Melanie gives the twenty dollars to Snake, so he can buy the tickets, and when she gets home, it turns out Melanie's babysitting job is canceled..so she can't pay back her mother. Eventually her mother gives up looking for the missing twenty and resorts to the fact that she must have lost it...until Melanie confesses she took it. At school, Snake gives her the ticket he bought for her, and she has to tell him that she's grounded so she can't go. Melanie figures she can just sell the ticket given it's no use to her, and when Spike gets the opportunity to go to the concert, but it's sold out, Melanie ends up selling the ticket to Spike.

When Joey fails to win over a few girls in the hallway, B.L.T. insults his charisma and tells him that he'll give him twenty bucks if he can find a date by Friday—a bet. Joey accepts and goes around asking many girls at school, most laughing, as if he's joking. Eventually, Snake pushes Joey into asking Caitlin, who accepts. They go to a movie, and go to the pizza parlor, where coincidentally, Michelle and B.L.T. are too. Caitlin and Michelle go to get drinks, but as Caitlin is re-approaching the table, she heard B.L.T. saying that Joey deserved the money because he won the bet. Caitlin gets angry and spills 2 sodas over Joey and storms out. Joey follows her, rips up the twenty dollar bill to show that he really likes her, and walks her home.

Shane is struggling with deciding whether or not to go to the Gourmet Scum concert. His friends encourage him to spend his monthly child support on the ticket because it's their last tour, Shane agrees. Shane then approaches Spike to tell her that he can't pay child support that month because he's broke, she believes him but is still angry. Liz overheard Shane and his friends talking about how Shane's going to the concert, and she isn't hesitant for a second before telling Spike. Spike approaches Shane and expresses her anger, because Shane gets to party and hang out all the time and she's always stuck at home caring for Emma, and when she has the opportunity, Shane doesn't pay and she can't go to the concert. Later on Spike gets another spare twenty dollars, so she has money for a ticket, however it's sold out so she's out of luck, until Melanie offers hers for sale. 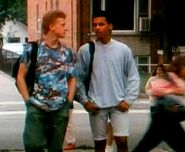