With or Without You

View source
watch 01:32
She-Hulk Trailer Dropped - The Loop
Do you like this video?
Play Sound

“With or Without You”

“Money for Nothing”
With or Without You is the sixth episode of Season 8 of Degrassi: The Next Generation. It aired on November 14, 2008 in the United States, and on November 16, 2008 in Canada.

Sav and Anya plan to celebrate their anniversary on the school's overnight camping trip. Only problem? Sav's sister Alli convinces their parents to let her go too. At Smithdale, both Manny and Emma are crushing on their roommate Kelly.

Many Degrassi students go on a camping field trip with Mr. Simpson. Anya and Sav break up, make up and break up again. Johnny and Alli begin to have feelings for each other.

Emma and Manny both like Kelly a lot and this might mess up their friendship since they both want to date him. 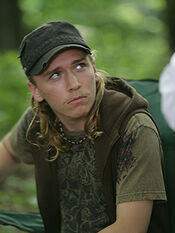 It’s like we belong. So I wrote this song, yeah. You’re my one My only Anya."