“You Are Not Alone”

“Enjoy the Silence”
You Are Not Alone is the thirty-first episode of Season 13. This episode began the final block of season 13.

Maya and the Rubber Roomies decide to put on a Burning-Man inspired "Panorama Night" to prove to the school they aren't delinquents. After Maya learns from Grace that Zig is gang-affiliated and finds "ganja" in his bag, she freaks out, flushes it, and vows to do whatever it takes to keep him on the straight-and-narrow. Zig freaks out in turn when he learns his weed is gone, and Grace reveals (too late) that he was peddling the weed to buy gang protection from chapters of the Bloods and MS-13 in his neighborhood; Maya worries she's put his life in danger.

Winston starts a Comic Book Society in an effort to meet girls, and when Frankie joins he discovers that she is growing out of being his surrogate little sister into a potential romantic partner. Zoe and Tristan suggest to Winston that Frankie thinks he's unattractive and he storms off to confront her, but when he arrives at her house while she's swimming and, spellstruck by her bikini, he falls in the pool where she reveals she thinks he's anything but unattractive and they kiss as Fitz and the Tantrum's "Out of My League" plays.

Heartbroken over Drew's rejection, Clare joins Triathlon Club to distract herself and makes an unexpected friend in Jack. Jack invites her to Axe-Throwing Club and Clare has a lot of fun; she demurs when she realizes all the other members are lesbians but Jack tells her she shouldn't feel uncomfortable and calls her "cool for a hetero." 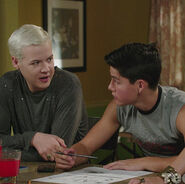 Retrieved from "https://degrassi.fandom.com/wiki/You_Are_Not_Alone?oldid=2837739"
Community content is available under CC-BY-SA unless otherwise noted.